Some of the best/brightest in the field offered a panel at SXSW Interactive to discuss multiple visions of a future with humanity intertwined with Robots – from dystopian Terminator/Skynet apocalypses to a benign Jetsons landscape with (sexy) helper companions.

The truth and trends are a curious blend of both. But first, we need to get over some issues. 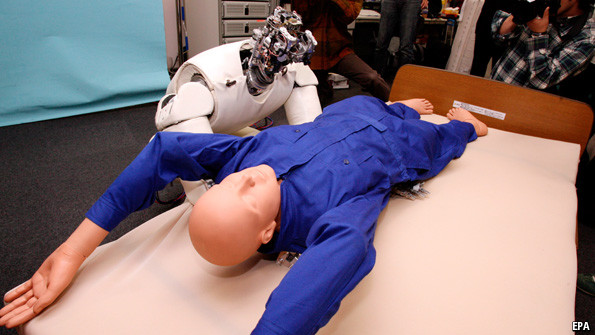 Robots – typically used for 3D tasks (dirty, dull, dangerous) – are evolving. Although definitions vary, a simple one is that a robot is a physical artifact that can perceive and interact with an environment. If we accept that robots don’t actually “steal” jobs, but actually bring manufacturing back to North America along with a cohort of skilled labour to work with them, we can get to the really scary stuff: ethics.

Most people know Asimov’s 3 rules for robots, but those are only binding in science fiction. Presently, the borders of North and South Korea are patrolled by robots that can “take initiative” without human intervention. NATO countries have drawn the line there, but the use of robots in combat are ever expanding. Human Rights Watch has called for a prohibition against autonomous robots within the war theatre. There’s even fledgling efforts to establish a Geneva Convention equivalent for robots.

Ethicists posit that robots are a reflection of the self (or by extension, the cultures they come from). The use of lethal force and manipulation of human emotions are most certainly areas of concern. Further, as robots become more capable, there needs to be boundaries re: moral and criminal implications for robotic actions.

Some cultures embrace robots – sensationally, a study done in Japan a while back showed that the elderly would rather be cared for by Japanese robots rather than nurses from neighbouring countries. Japan’s official policies re: work visas also support this. The majority of people in North America already name their GPS units or robotic vacuum cleaners. There are even stories of combat engineers and bomb disposal experts asking for exploded pieces to be brought back to life. (“That’s the one that saved my life – you need to fix him. I don’t want a replacement.”)

With giants like Google scooping up robotics companies (8 acquired just recently) and also grabbing AI innovators, we’re on the doorstep of radical change. Robotics is where the internet was 20+ years ago – metaphorically, thin pages of text and lists, but is about to go through a comparable explosion across industries and cultural touch points.

All this begs the question: is it going to be Skynet or Wall-E?