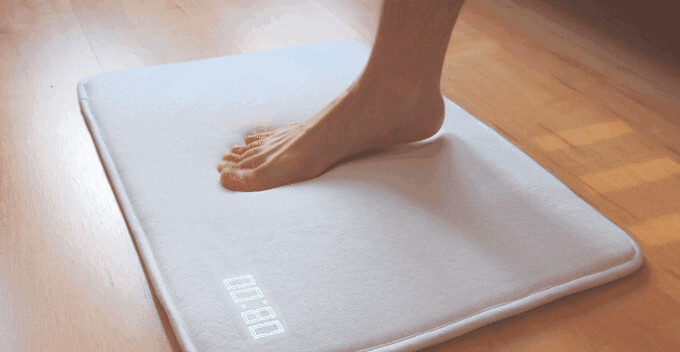 I’ll admit it, I’m a snooze-button addict. Show me a button that allow me to sleep for a couple more minutes and I’ll hit it. Over and over again.

Apparently I’m not alone. The creator of the Ruggie, an alarm clock designed to get people out of bed, says it’s something he used to do as well.

”Too many times I’ve over-snoozed. I know how it feels, it sucks. There is so much resistance in the morning, the warm comfy bed, the cold floors, that awesome dream we just had,” Winson Tam told The Huffington Post. “I created Ruggie to help myself and others get out of bed easier and be more productive.”

Essentially, the device is an alarm clock inside a rug and the only way to shut of the alarm is to stand on it.

The idea is to get people out of bed and standing up rather than swatting at an alarm clock or tapping a phone.

Tam is currently raising money to bring the device to market on Kickstater.

To prevent users from to beat the device, it requires them to stand in the middle, with both feet, for at least three seconds, though that time can be extended.

Users can also put their own audio on the device so that when the alarm stops it plays a song or a motivational message. It also can act as a nightlight; when users step on the device it lights up for 20 seconds.

Tam says that many of the world’s most successful people – everyone from Bill Gates to Benjamin Franklin to Elon Musk and Barack Obama – are (or were) early risers who only slept for between six and seven hours a night.

While the Ruggie might not put users into that rarified company overnight, it certainly could help get people up in the morning.

The campaign is looking to raise $50,000, with 50 days left to go it has more than doubled that goal.