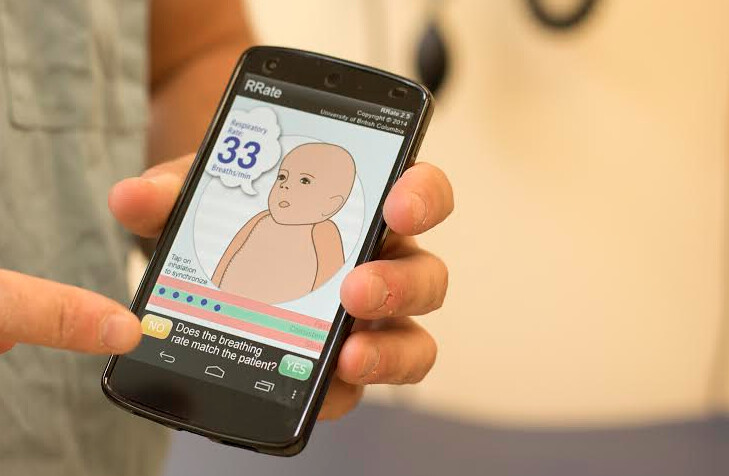 A mobile app developed by researchers at the University of British Columbia (UBC)’s Faculty of Medicine is tugging at our heartstrings like nothing else – literally.

The app – RRate, which became available earlier this year on all iOS and Android devices in a public testing mode – can measure the respiratory rate of a child about six times faster than any other device, according to the recently released findings of a UBC study.

“Mobile phones are changing how we administer health care, especially in rural settings and developing countries where access to medical devices is limited,” says Dr. Walter Karlen, a UBC Postdoctoral Fellow and one of the researchers who developed the app. “With this app, we can give health care workers with few resources faster and more accurate measurements, help them make better decisions, and give them more time with their patients.”

Upon downloading the free app, users tap the touch screen every time a child inhales and can instantly measure their respiratory rate. In addition to calculating the rate of inhalations during a given time, the app also provides an animation of a breathing baby allowing for a direct comparison with the breathing patient.

“We are leveraging the phones’ capabilities of computing, touch screen, and vibrational feedback to measure respiratory rate faster and with more confidence,” Dr. Karlen says.

He notes that the genesis of the app, which was developed in collaboration with the Child and Family Research Institute (CFRI) at BC Children’s Hospital, can be traced back to 2012 when his team of researchers generated the concept for it. “Pneumonia can cause two million deaths among children worldwide every year,” he explains. “One of the criteria for a diagnosis is whether the child has a high respiratory rate.”

And, unfortunately, he says the manual way health care workers have been measuring the heart rate of a child – which involves looking at them and counting the number of breaths they take for a minute with a stopwatch – “can be very time-consuming and difficult.”

“We were doing research on how we can facilitate these changes with very simple apps,” he says. “If we can shorten that process, that would be great.”

And, evidently, their study findings suggest that they did. The findings report that RRate can reliably measure respiratory rate in an average of 9.9 seconds. The longest it took was 18 seconds, Dr. Karlen adds.

The study involved collecting data from 30 users who used the app while watching videos of children breathing at different rates.

Dr. Karlen says that he and his team have plans to integrate the app with the Phone Oximeter, another app that the researchers and CFRI developed to measure blood oxygen levels. “The ultimate goal is that this will be used in a clinical setting to be able to diagnose pneumonia and other respiratory illnesses.”