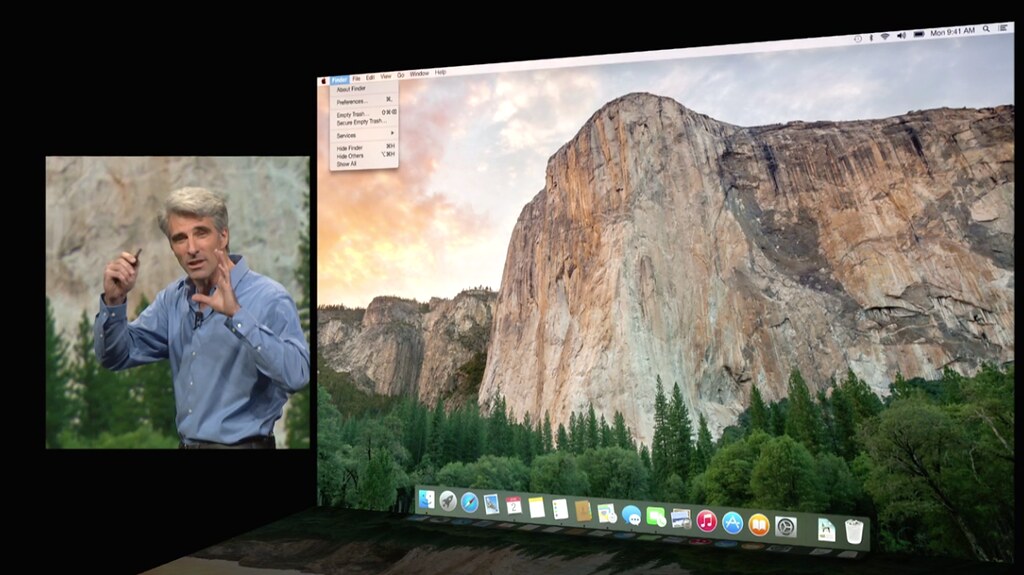 At the Moscone Center in San Francisco during Apple’s 25th annual Worldwide Developers Conference, Tim Cook and co. today revealed the next generation of Mac software.

Here are some of the user interface updates and new features:

• Subtle design changes, including more transculency, cleaner and more consistent fonts, and the introduction of an optional “dark mode.”

• Other minor refinements including icon design, toolbar and windows, and other iOS-inspired updates.

• Messages and Calendar have minor tweaks and improvements.

• Spotlight now pops up in the middle of the screen and offers richer search results, sourced from Yelp and Wikipedia.

• Launch of iCloud Drive, which appears similar to Dropbox. Synced across all Mac and iOS devices (plus Windows support), any file can be stored and organized.

• Mail app has a new UI plus new technology Apple calls “Mail Drop,” which sends oversized email files separately via the iCloud. Supports files up to 5GB in size.

• Safari now has Spotlight integration and an improved “smart bar” which enables a more minimalist, content-focused design. Sharing and tabs have also been slickly refined.

• Markup allows users to edit photos within the Mail app.

Apple emphasized seamless transitions between iMac, iPad, and iPhone more than ever in today’s keynote.

• Airdrop now works between iOS and Mac. The devices become aware of each other, allowing you to start a project on one device and finish it on another.

• Apple fixes its iMessage/SMS problem, and in fact Yosemite will enable users to see Caller ID and accept phonecalls from your Mac, even if your phone is in another room. You can also call numbers from your Mac. (You need an iPhone for this to be possible.)

Yosemite is available to developers today. Consumers will get it in the fall at no charge.

Apple today announced OS X Yosemite, a powerful new version of OS X redesigned and refined with a fresh, modern look, powerful new apps and amazing new continuity features that make working across your Mac and iOS devices more fluid than ever. The new Today view in Notification Center gives you a quick look at everything you need to know, all in one place; iCloud Drive is located within the Finder and can store files of any type; and Safari has a new streamlined design that puts the most important controls at your fingertips. Mail makes editing and sending attachments easier than ever; Handoff lets you start an activity on one device and pass it to the other; and Instant Hotspot makes using your iPhone’s hotspot as easy as connecting to a Wi-Fi network. Yosemite even gives you the ability to make iPhone calls on your Mac.

“Yosemite is the future of OS X with its incredible new design and amazing new apps, all engineered to work beautifully with iOS,” said Craig Federighi, Apple’s senior vice president of Software Engineering. “We engineer our platforms, services and devices together, so we are able to create a seamless experience for our users across all our products that is unparalleled in the industry. It’s something only Apple can deliver.”

With Yosemite, OS X has been redesigned and refined with a fresh modern look where controls are clearer, smarter and easier to understand, and streamlined toolbars put the focus on your content without compromising functionality. Translucent elements reveal additional content in your app window, provide a hint at what’s hidden behind and take on the look of your desktop. App icons have a clean, consistent design and an updated system font improves readability.

The new Today view in Notification Center gives you a quick look at everything you need to know with widgets for Calendar, Weather, Stocks, Reminders, World Clock and social networks. You can even download additional widgets from the Mac App Store to customize your Today view. Spotlight now appears front and center on your desktop and adds new categories of results, so you can view rich suggestions from Wikipedia, Maps, Bing, App Store, iTunes Store, iBooks Store, top websites, and news.

Built right into the Finder, iCloud Drive stores files of any type in iCloud. iCloud Drive works like any other folder on your Mac, so you can drag documents into it, organize them with folders and Tags and search for them using Spotlight. With iCloud Drive, you can access all your files in iCloud from your Mac, iPhone, iPad or even a Windows PC.

Safari has a new streamlined design that puts the most important controls at your fingertips. A new Favourites view gives you quick access to your favourite websites, and a powerful new Tabs view displays thumbnails of all your open web pages in one window. Safari also gives you more control over your privacy, with separate Private Browsing windows and built-in support for DuckDuckGo, a search engine that doesn’t track users. When you search for popular or common terms, new Spotlight Suggestions appear along with the suggestions from your search provider. Safari supports the latest web standards, including WebGL and SPDY, and with support for HTML5 Premium Video Extensions, you can watch Netflix HD videos for up to two hours longer. Powered by the Nitro JavaScript engine, Safari is over six times faster than Firefox and over five times faster than Chrome when executing JavaScript found in typical websites.

Mail makes editing and sending attachments easier than ever. With Markup you can quickly fill out and sign forms and even annotate images and PDFs from within Mail. Mail Drop allows you to easily send large videos, images or files up to 5GB from the Mail app to any email address. Messages has a new look and delivers even more options for communicating with friends and family. Now you can add titles to ongoing message threads so they are easy to find, add new contacts to ongoing conversations, or leave those conversations you no longer want to follow. With Soundbites you can create, send and listen to audio clips right in Messages.

Continuity features in Yosemite make your Mac and iOS device perfect companions. When your iPhone or iPad is near your Mac, Handoff lets you start an activity on one device and pass it to the other. Instant Hotspot makes using your iPhone’s hotspot as easy as connecting to a Wi-Fi network. Now the SMS and MMS messages that previously only appeared on your iPhone appear in Messages on all your devices. You can even send SMS or MMS messages directly from your Mac and make or receive iPhone calls using your Mac as a speakerphone.

Yosemite delivers platform technologies that make it easier for developers to create amazing new Mac apps. SpriteKit makes it easier to incorporate realistic motion, physics and lighting in games, and integrates with SceneKit to bring 3D casual gaming within reach of any developer. Storyboards for Yosemite and Xcode 6 take advantage of the new View Controller APIs in AppKit to make it easier to build apps that navigate between multiple views of data. New APIs allow developers to integrate Handoff into their own apps and create Today view widgets for distribution through the Mac App Store. Share Menu extensions add new destinations to the Share Menu, and new APIs let developers create custom Share Sheets.

The developer preview of Yosemite is available to Mac Developer Program members starting today. To help make OS X even better, Apple is introducing the OS X Beta Program, which gives customers early access to Yosemite and invites them to try out the release and submit their feedback. Mac users can participate in the OS X Beta Program for Yosemite this summer and download the final version for free from the Mac App Store this fall.

Apple designs Macs, the best personal computers in the world, along with OS X, iLife, iWork and professional software. Apple leads the digital music revolution with its iPods and iTunes online store. Apple has reinvented the mobile phone with its revolutionary iPhone and App Store, and is defining the future of mobile media and computing devices with iPad.