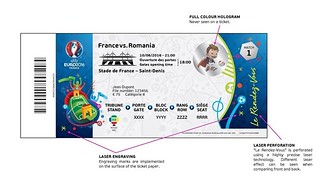 Nanotech Security announced today it will be providing authentication and brand-protection technology for admission tickets to the UEFA Euro 2016 Football Championship.

The prestigious sporting event is being held in France from June 10 to July 10, 2016.

KolourOptik technology accurately controls the wavelengths of light at nano-scale, producing an ultra-high resolution image that can only be seen from specifically engineered viewing angles.

Only using the reflection of light and no ink, the nano-sized holes create the famous event mascot “Super Victor” in a photonic intense high resolution image.  Together with other ticket features, KolourOptik brand-authentication technology helps secure the authenticity of each ticket and protects against ticket fraud.

Nanotech CEO Doug Blakeway said, “The Super Victor image demonstrates the extensive commercial application of our KolourOptik® technology, which provides a more secure, vivid image for authenticity and branding purposes than any other commercial technology.  This advanced authentication feature will be instantly recognizable while adding to the visual aesthetics of the ticket.  Nanotech’s KolourOptik technology creates intense, high-definition images that exhibit unmatched colour, brightness and definition.”