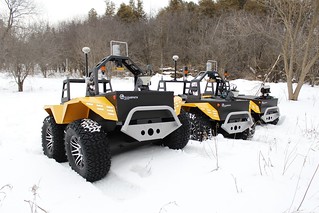 It’s been a busy year for Kitchener’s Clearpath Robotics.

The company raised $14 million in March, increased it headcount to over 100 people, opened an office in Silicon Valley and launched new robots.

“Our Series A round of funding was completed 12 months ago, so the past year has really been about becoming a venture-backed technology company,” says Matt Rendall, Clearpath’s CEO.

“We released some really exciting new products immediately after receiving our Series A round, we announced a strategic partnership with GE and we’ve tripled the size of our team. We’ve spent the year focusing on aggressive growth and this new set of high expectations that we’re holding ourselves to.”

“We joke at Clearpath that we actually measure years like dog years, one is like five, because so much happens,” says Meghan Hennessey, Clearpath Robotics’ marketing communications manager.

Clearpath is also a finalist for Startup of the Year at the Canadian Startup Awards.

It’s a new market for Clearpath and it’s a new type of robot.

While there’s a lot of talk about self-driving cars, Hennessey says that, no one else has launched a self-driving vehicle for indoor industrial use.

It’s a market that the company plans to focus on as it expands its footprint from selling to research and enters the industrial market. It’s a shift that’s being enabled by what’s being called Industry 4.0, a shift towards the use of more technology in manufacturing operations.

“The new generation of robotics is enabled by massive technology pillars that have been in development for the last decade – cloud computing, big data, the internet of things, and mobile computing,” says Rendall. “Now we’re able to capitalize on these trends to make self-driving vehicles possible. What’s most exciting is how early we are in the history of robotics. To be in this field means that we’re able to have a very meaningful impact on the creation of this industry – we’re able to define the industry.”