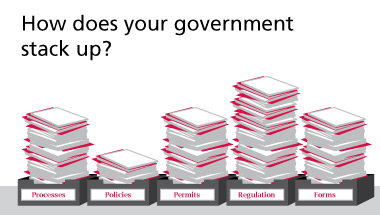 The grades are in, and governments across Canada have been marked on how well (or poorly) they are doing in terms of measuring and publicly reporting on the rules, processes and paperwork that they impose on small business.

BC ranked best with the country’s only “A” grade, while the Northwest Territorities ranked last with the only “F” grade. Most provinces either maintained or improves their grade over 2013.

The Canadian Federation of Independent Business’ 4th annual Red Tape Report Card is primarily assessing progress on regulatory accountability. The main criteria for success are measurement of, and publicly reporting on, the regulatory burden.

“This is a report card on the basics. It’s not that hard to do well,” said Laura Jones, CFIB’s executive vice-president. “Red tape reform has a simple formula: Measure, report, repeat. You can’t get where you’re going if you don’t know where you are.”

“Some jurisdictions are much further along than others, but each has its share of challenges,” added Jones. “Even those that measure are not always capturing the full spectrum of regulatory requirements. So there is still a lot of work do, but we are getting there.”