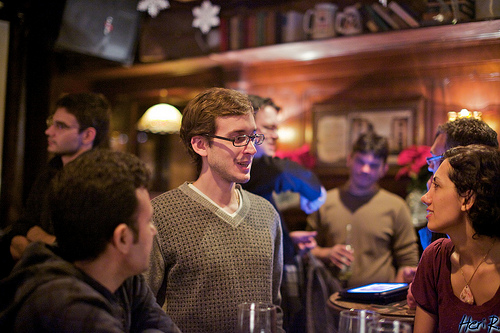 Last week I was invited to address a room of nearly 100 Toronto entrepreneurs at the Centennial College Centre For Entrepreneurship networking event. The topic of my talk, not surprisingly, was networking. In particular, how to become a “master networker.”

There is something very odd that happens to otherwise normal people when they get into networking mode. I’ve seen this time and time again. The person might be a cool individual with great conversation skills or at least the ability to interact without sounding annoying. Then I’ll see those same people at a networking event and all of a sudden, it happens: they transform into their networking alter-ego, a socially awkward person who is either hyper-aggressive and frantically trying to shove business cards down someone’s throat or this super-nervous person who is afraid to even make eye contact with fellow humans.

What’s up with that? What is it about the act of networking that makes people become so strange?

My first experience in understanding the essence of networking came when I was seven years old. One of my relatives was responsible for sales with a large multi-national client. This client would offer companies 15 minutes to pitch their product except for my relative. He always received 30 minutes instead. Now, only 15 minutes of that was spent discussing business, the remainder was casual conversation.

I never understood why this was an advantage—“isn’t he just wasting his time? It’s not like he gets more time to pitch his product.” It was at that point my family member turned to me and said what became a fundamental pillar in my personal business development, “Anisa, business follows as a by-product of friendship.”

So, in that sense, everyone has experience networking. Whether in your personal life, social circle, office colleagues, etc., all of us have some sort of established relationships. So why act any different when it comes to building relationships for your small business or startup?

In my personal career journey, before and after launching Giveffect, networking has played an important role. So here are my 10 Steps to making you a master networker.

Personal branding is a way for you to showcase your expertise and interests to potential networks, while giving you a dash of personality at the same. This is NOT necessarily the same as your company brand.

As a startup entrepreneur, your resources are valuable esp your time and money. So, don’t wander around aimlessly when it comes to your approach to networking. Make a clear list of high priority contacts you are looking to network with.

3. Find the path of least resistance

Yes, there are many ways you could connect with a potential client for networking purposes. But there is 1 best way to connect with him/her in the fastest, cheapest and most impactful way. Maybe you both volunteer at the same charity? Maybe you have a mutual friend? Maybe they’re speaking at an upcoming conference? Or maybe your kids go to the same swimming class? Whatever it might be, it is your task to find the path of least resistance.

Most people make the mistake of still assuming that networking starts and ends at “Networking Events”. Wrong! In fact, today, most successful networking begins online and later translates to an offline encounter. So turn to Twitter, LinkedIn, blogs and vlogs to make that first impression and get acquainted with the contact. Important: Don’t ASK for something in your first encounter! Just focus on building some common ground.

There is no point of accumulating hundreds of business cards or e-intros if it doesn’t lead to something. My suggestion when attempting a follow-up is always ask for advice. This does 2 things: 1 it compliments the individual by recognizing them as a thought leader in their space and 2. It is a great way to start building a relationship. However, be specific on what you are seeking advice on!

Your network will be more solid if you can add multi-dimensions to your interaction. Look to see if there are any other mutual grounds: common friends, volunteer at the same charity etc. This helps deepen connections.

Take up a second career as a volunteer. No, seriously. People who are volunteering with organizations also have professional networks and associations. Furthermore, they are clearly people that are willing to help, which makes them extremely resourceful additions to your networking circle.

Successful networking does come with a price tag. Whether it is the cost of attending events (charity galas, conferences etc), buying a contact coffee or asking someone out for lunch, you need to allocate some financial resources to help you. My advice: always try and budget 2 meals a month where you will treat a valuable business contact or show appreciation to a contact who has been a key referral source.

9. Don’t be afraid of rejection

Yes, it is both possible and plausible that you might ask someone for an intro to a contact or seek to build a relationship with a network and get turned down. That’s ok! And it really isn’t so bad – you should take this as an opportunity to learn why they may have refused.

I do this a lot. At the end of each month I assess if I was successful at forging new relationships. In particular, I measure which ones led to business, who were my core connectors/referral sources and how much money did I spend networking. I then modify my approach accordingly to help refine my networking skills.

There you have it. Implement these steps and you’ll be well on your way to becoming a Master Networker. And remember, networking is nothing but building relationships.

Originally published on the Giveffect blog.