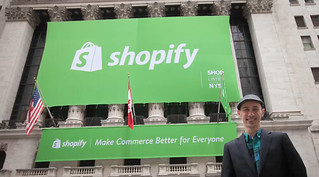 Shopify has raised $131 million in its initial public offering.

The IPO price current values Shopify on the public market at a very unicorn-like $1.27 billion, based on 74.4 million shares outstanding.

According to a statement from Shopify, the Ottawa-based e-commerce company sold 7.7 million Class A subordinate voting shares for U.S. $17 apiece after offering them for U.S. $14 to $16. They were initially priced at U.S. $12 to $14.

The IPO is expected to close on or about May 27, 2015. Shopify expects to use the net proceeds from the offering to strengthen its balance sheet, providing it with flexibility to fund its growth strategies.

ALSO: For Employer of Year Shopify, Being a Great Place to Work is About More Than Just Perks

Shopify continues to hire like crazy with 43 opportunities currently listing on the Techvibes Job Board.