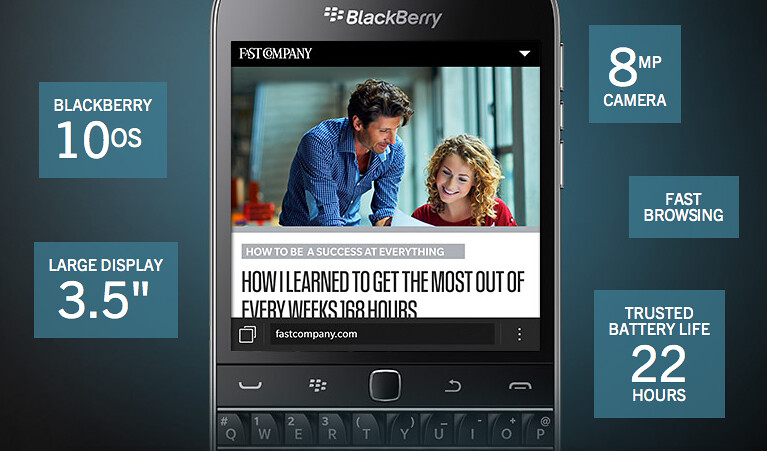 Today, BlackBerry launched its latest smartphone, the BlackBerry Classic, a “no-nonsense” device for QWERTY-lovers on a budget.

Responding to customer demand for a “familiar design” with upgrades, the Classic mimics the aesthetics of BlackBerry’s most iconic design, the Bold 9900. However, compared to the Bold, the Classic is significantly faster with substantially more screen space and a dramatically longer battery life.

The Classic also runs BlackBerry’s latest software, which is a titanic upgrade over the Canadian company’s legacy operating systems. And while the Bold was BlackBerry’s top-end smartphone, the Classic is a lower-tier device—it will start at around $50 on contract in Canada.

“We listened closely to our customers’ feedback to ensure we are delivering the technologies to power them through their day—and that feedback led directly to the development of BlackBerry Classic,” said John Chen, CEO at BlackBerry.

“BlackBerry Classic is the powerful communications tool that many BlackBerry Bold and Curve users have been waiting for,” he continued. “It’s the secure device that feels familiar in their hands, with the added performance and agility they need to be competitive in today’s busy world.”

Meanwhile, the Waterloo-based smartphone maker is getting a boost from Export Development Canada. The crown corporation struck a five-year loan agreement with European telco Vodafone; the deal includes a commitment of $750 to purchasing BlackBerry hardware and software and technical support. The specific terms of the all-in deal aren’t known, but we hear Vodafone scored some hefty discounts.