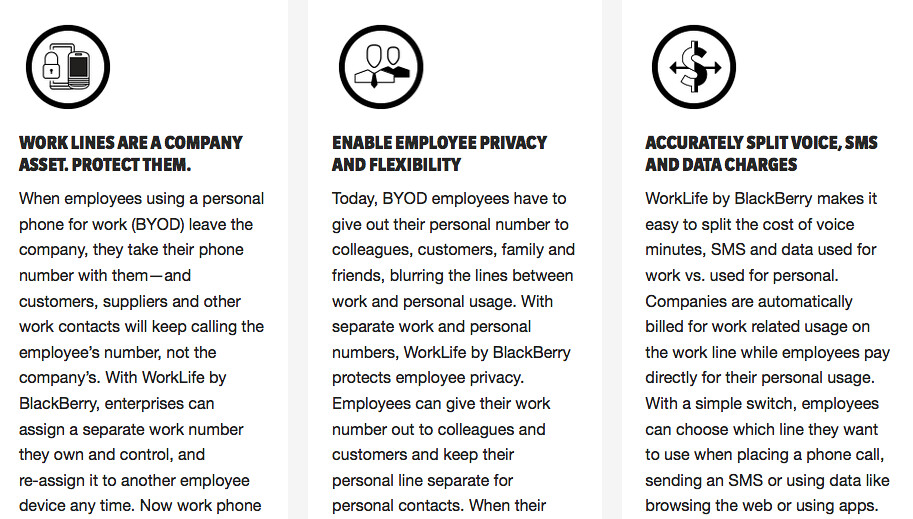 Neither BlackBerry nor Samsung are making any profits in the smartphone industry. But they’re convinced they can benefit from each other.

WorkLife by BlackBerry brings to KNOX a solution for enterprises to accurately split mobile billing, respect employee privacy and protect corporate assets. It can separate work and personal voice and SMS as well as data usage.

BlackBerry subsidiary Secusmart and its SecuSUITE solution offers highly security-conscious organizations like governments virtually tap-proof voice and SMS communications that are secure enough for world leaders. BlackBerry and Samsung are working closely together to bring this government-grade security to KNOX-enabled smartphones, including the newly announced Samsung Galaxy S6. BlackBerry acquired Secusmart in 2014.

In addition to integrating solutions, Samsung will offer BlackBerry enterprise products and services through its new Samsung Business Services.

“Working with BlackBerry allows us both to bring more compelling solutions to the enterprise,” said Injong Rhee, Executive Vice President of Enterprise Business, IT & Mobile Communications Division at Samsung Electronics. “Workers are tired of carrying two devices and companies are growing sensitive to the risks of having company assets tied to personal smartphones.”

“Customers tell us that enterprise solutions have to provide flexibility in terms of device choice and mobile deployment models such as BYOD or COPE,” said Billy Ho, Executive Vice President, Enterprise Product and Value Added Solutions, BlackBerry. “With these great choices, companies won’t need to choose between security and compliance on one hand and employee choice and productivity on the other.”

BlackBerry and Samsung are working with carriers worldwide to enable WorkLife and expect the service to launch later in 2015. Pricing and availability will be announced on a carrier-by-carrier basis.