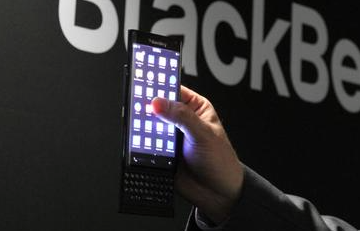 The device, which features curved screen edges similar to those of the new Samsung Galaxy S6, is an all-touch smartphone with a sliding keyboard, the likes of which we haven’t seen since the BlackBerry Torch flopped in 2010.

BlackBerry won’t launch the slider phone until later this year, however. For now, we can enjoy the Leap, a more conventional midrange smartphone. BlackBerry Leap includes an edge-to-edge, five-inch HD display and “more than a full day’s battery power,” according to the Canadian company. It does not feature a physical keyboard. The Leap has 16GB of storage and an 8MP camera. It’s expected to retail for around $300 in Canada.

John Chen, CEO of BlackBerry, says the company is also considering re-entering the tablet space, after exiting it following a failed launch of the PlayBook in 2011.