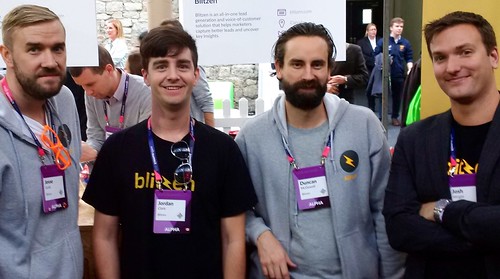 It’s easy–often too easy–to get caught up in the excitement of life in a fast-growing startup community.

Each day seems to bring another new company with another clever idea, and in Waterloo Region, it’s been this way for several years running. International press coverage is no longer a novelty, while national attention is practically routine. A chorus of outside voices has singled us out for our resilience in the face of BlackBerry’s downsizing, for our stratospheric startup density (second in the world only to Silicon Valley’s), for the quality of our talent, and for our strong and supportive culture.

In other words, it’s easy– ften too easy–to forget that the fate of all of this comes down to the individual efforts of entrepreneurs in this community. And for them, there’s nothing routine, assured or easy about it.

I was reminded of this on Tuesday, when I caught up via Skype with Jesse Guild, CEO of Blitzen. Guild and co-founders Duncan McDowell, Josh Wright and Jordan Clark were at the massive Web Summit in Dublin, where they brought Blitzen out of private beta and launched their business lead-generation and tracking software into the world.

As Guild and I spoke, I was once again impressed by the sheer nerve it takes to quit a job to build something from scratch, then pivot away from it in the uncertain pursuit of an even bigger opportunity. Blitzen, which started the week sitting at the edge of that opportunity, has now taken a big leap toward it, and that’s where my conversation with Guild began.

Read the full Q&A on Communitech.