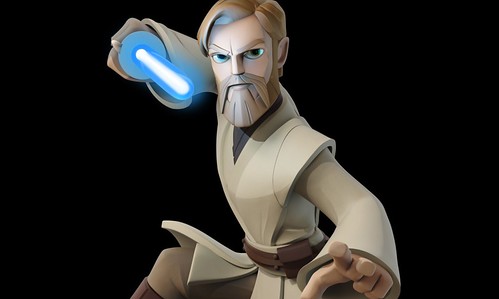 In further not so surprising fashion, the figures are currently retailer-exclusive. And the small line of Light FX Figures available as follows:

It is unclear at this time whether these will be the only Light FX Figures made. But it’s within reason to assume more will launch in the new year (the Force Awakens set is soon to hit store shelves).

However, this puts light on a much more puzzling conversation than one might easily see on the surface, at least to those not already hooked on the toys to life genre. It’s not a new trend, this rerelease of figures with a different coat of paint. But it’s feeling a little draining.

Disney did it with 2.0, releasing limited translucent versions of their most popular figures, and running up another hundred-plus dollar investment from those diehard collectors. But are we to believe that’s their target demographic for these limited versions this time around? I mean, if you discount their timely release with the palpable worldwide exposure that the Star Wars brand is getting right now (three days before it’s theatrical release) that is.

I swear… I saw oranges in the grocery store with SW copyrighted branding. Gum, humidifiers, candy bars, phones, you name it. Star Wars is everywhere. So is it a pry at collectors? Or is Disney trying to play the hype game with us, like everyone else seems to be?

It’s easiest to use myself as an example here. So I will. I have loved every iteration of Disney Infinity. Some more than others. But I’ve never gotten on board with the feverish desire to own each figure in the (rather well timed, thought out) release schedule. Regardless of how fun the idea of “hunting” seems.

That was, until they announced that Infinity 3.0 would include the newly acquired Lucasfilm license. I instantly hoped the bus to IDONTCARETAKEMYMONEYSVILLE and haven’t looked back since. I had to have all of the finely crafted, carefully designed statuesque characters spanning every major story-arch in the franchise. Now, two months after buying some of these awesome physical representations of characters I hold dear, if I want a slightly tweaked (majorly cooler) version of them, I have to pony up again.

What I’d rather have at my disposal, is the option to—when buying them originally—choose between the Light FX version, or the plain ones. Even if the Limited editions cost more, I would have probably picked a few to call my pinnacle of greatness, and had them pretend mock the lesser standard figures within my inner monolog. Ala Dark Helmet in Space Balls. *mimes two toys fighting one another*

People like collecting. That’s a given. I’m a sucker for the galactic drama that pits two sides of a “hokey religion” against each other during the fall/rise of democracy in the civilized systems. Fact. And the toys-to-life model of gaming has a big affect on those that take the same path that I do (appreciating physical things). But is it getting to be too much? Have they started going too far? Or possibly, should those who don’t NEED to have one of everything just lay down their LightSabers and resign to the serious collectors and ignore the ploy for just a little bit more money?

Don’t get me wrong. I want the new Light FX Figures. Really badly. They are the same amazing moulds as the originals, which include an above-par paint job, and a unique little “Disney-flare” in the character design, but instead of a normal solid Saber, theirs light up when you put them on the Infinity base. I assume it’s a simple trick, as the base has lights in the character slots. Letting the light come up through the bottom of the figure, and out through the lazersword. None of which is divulged in the press release however.

Instead we’re given obviously manipulated asset photographs. And they’re beautiful. I will most-likely be replacing my Darth Vader (by far my favourite thus far) with the Light FX version, and demote my non-FX model to desk/office decoration.

Simply, the issue with the Light FX limited edition Infinity Star Wars figures (or any re-release of something people already own) only applies if you have an issue with it. Otherwise, they’re must-haves for anyone looking to keep a full stock of Star Wars Infinity figures. And a perfect gift this holiday season.