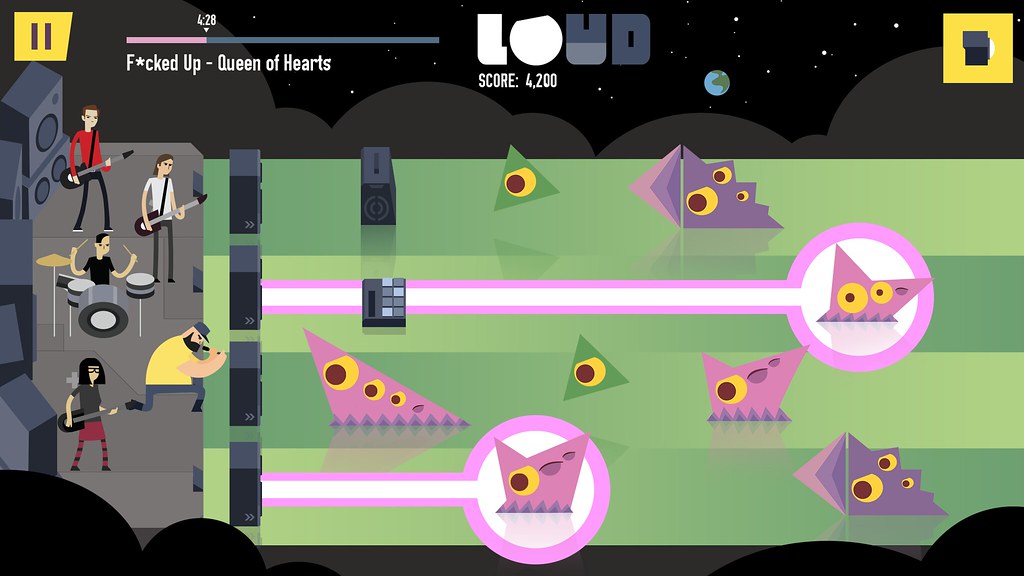 Every once and a while, something comes along that is so blatantly Canadian, and so outrageously awesome, that it’s hard to actually talk about it. It would be far easier if I just held it up—like a wallet fold-out containing pictures of my children—and shove it in people’s faces screaming “Pay attention to this!”

LOUD ON PLANET X is one of those things.

Remember the hype train that didn’t seem to stop gaining speed when Music-Rhythm games became a thing. Not only was it one of the kings of pushing peripherals, but it also connected gamers with a ton of music they had previously never been exposed to.

Now that the buzz has worn off, there’s a distinct lack of games trying to come into that genre. In comes POP Sandbox, and their new game, LOUD ON PLANET X (referred to as Loud from now on). Hitting Steam/PSN today, and Mobile on April 21, Loud looks to take the reigns of a dying giant and turn it into the Canadian Indie darling that we’ve all never asked for, but will forever lead more brilliantly shining lives due to.

LOUD allows the player to choose from an array of top established and emerging musicians, including Tegan and Sara, Metric, F*cked Up, METZ, Purity Ring, Austra, Lights, July Talk, Shad, and Cadence Weapon, amongst others, to defend their stage against hordes of attacking aliens.

The game also includes three original scores created by members of F*cked UP, Broken Social Scene, and Harrison, continuing the tradition of amazing musical talent north of the 49th.

While LOUD is a rhythm game at heart, it’s also part tower defense. Using the harnessed awesomeness of an adorably reimagined cartoon version of your favorite Canadian bands, fight off hordes of invaders.

This game has everything. It’s one of those ideas that makes you say “Why didn’t anyone do this sooner?” but then you realize that no one would have been able to do it the way POP Sandbox has done it.

You can find the game on Steam or PlayStation for $8.99. Loud will launch on mobile devices tomorrow for $5.49. Trust me, this is going to bring a lot of joy into your life, and a ton of new music to your ears.