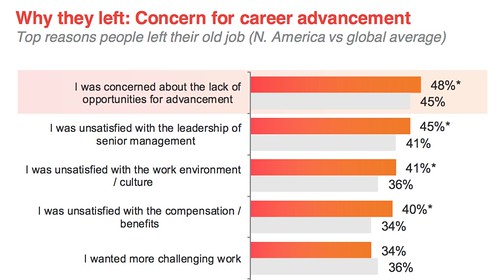 The survey revealed that North American workers are more concerned with the opportunity than the size of their paycheck. 48 per cent of North American job switchers left their old job because there wasn’t enough opportunity for advancement, and 63 per cent chose their new position based on the hope for a stronger career path.

The study also showed that Canadian job switchers are less likely to follow the money than their neighbours to the south. Only 68 per cent of Canadian professionals receive greater compensation in their new role versus 76 per cent of those in the U.S.

41 per cent of female job switchers were influenced by improved work/life balance, versus 35 per cent of men.

While North American professionals are harder to dissuade, for many the decision to leave is not set in stone. 38 per cent of North American job switchers said that their employer could have changed their minds, compared to the 42 per cent global average.

U.S. job seekers are more aggressive than those in Canada. Half of US professionals who recently changed jobs interviewed with more than one company. 56 per cent of those in Canada did not.

Perform content is powered by the Techvibes Job Board.