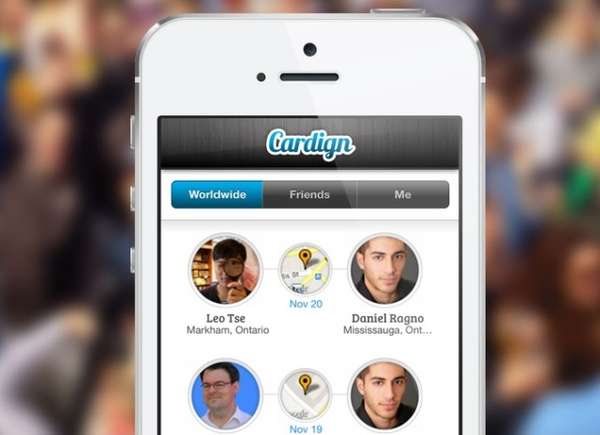 After launching in late 2012, facial recognition app Cardign has reached 15,000 users and is looking to integrate with Google Glass.

Cardign is a quick way to capture contacts using facial recognition. Users take a picture of a person’s face and full contact information is provided, including Twitter, Facebook, LinkedIn and FourSquare profiles. They can also sync contacts, explore meetings, find out which friends are attending an event and where other friends met.

Besides solving another common pain point- forgetting who that mystery colleague is when you see their face at an event- the app also automatically updates contact information like new jobs or locations.

It’s a product of Digiflare, the Toronto-based creative agency that designs apps for clients like Rogers, Bell, Shaw, MSN, Astral and many others. A three-man team at Digiflare created the app, including (Cardign) CEO Jean-Luc David, cofounder Leo Tse and designer Johnny Chauvet. As head of the incubation unit at Digiflare, David pitched the idea to the company and they agreed to invest $25,000.

As an explorer’s permit holder with Google Glass, David and the team are currently planning an integration that would allow users to photograph a contact with the Glass’ camera. It would connect to Cadign’s API and instantly pull up relevant information. The team has set an “internal wager” amongst themselves to try and integrate Cardign within 24 hours of having access to Google Glass. “We’re going to be pretty aggressive to try to integrate,” said David.

Upon its launch four months ago experts declared that Cardign would fall victim to the chicken and egg dilemma, as users must first download the app and take three pictures of themselves.

However the team received positive feedback and watched their user count rise steadily over the past four months. Those users who are using the app are using it quite extensively too. “We’re trying to solve a hard problem,” David told Techvibes. “Ideally the app will function beautifully if there’s four billion facial profiles in our database and so we’re trying to solve things like that.”

Soon they’ll be launching a second, refined iOS version of the product that will be available on Android as well. It should “make Cardign pretty much ubiquitous. No matter who you meet it should just work,” said David.

They want to make it as easy as possible for people to use the app. Stronger contextual features are also in development so that users will know immediately what interests they share with any contact. “With this information it will make it a lot easier to break the ice and forge new connections and that’s one thing that seems to be a gap,” said David.

Finally they’re building a database of faces so taking another’s picture may not even be necessary in the future. That could be a while off though. In the meantime users can rest assured that if they add a colleague on Cardign, for better or worse they won’t ever forget that face again.