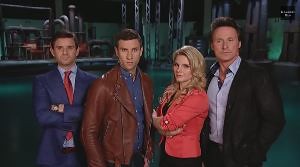 A brand new panel of Dragons have entered CBC’s Dragons Den and are looking to invest in the next generation of Canadian entrepreneurs.

Created by the producers of Dragons’ Den, the Next Gen Den targets mobile viewership through a series of 12 webisodes available exclusively online beginning February 2.

“We don’t always have room on our TV show for as many of these early-stage entrepreneurs as we’d like to feature. Here you will see smaller, riskier deals than we see on the broadcast show; most of these businesses aren’t proven models yet. The fun is watching our new panel of Dragons sort through them. Will they discover the next Mark Zuckerberg, or spot the next Blackberry? We hope the NEXT GEN DEN will seed the next big thing.”

In this version of the Den, the rules are the same – pitchers must take what they’re offered, or walk away with nothing. Four Dragons are featured throughout the 12 webisodes, with three seated on the panel at a time. These entrepreneurs represent the next generation of Dragons and include Michael Hyatt, chairman of Bluecat; Michele Romanow, co-founder of Buytopia.ca and SnapSaves; Matthew Corrin, CEO and founder of Freshii; and Paul Miklas, CEO of Valleymede Building Corp.

Michael Hyatt – A millionaire by the age of 25, Hyatt built two highly successful tech firms: Bluecat and Dyadem. Today he ranks as one of Canada’s pre-eminent investors in tech start-ups.

Michele Romanow – By the age of 29, Michele already had four tech companies under her belt. An e-commerce powerhouse, Michele has grown Buytopia.ca to over 2.5 million subscribers and sold her latest venture to Groupon for millions.

Matthew Corrin – Best known for creating Canada’s biggest fresh food chain, Corrin started Freshii at the age of 23. Today Freshii has over 100 locations in 12 countries around the globe. Corrin also invests heavily in tech through his incubator, Fresh Startups.

Paul Miklas – As CEO of Valleymede Building Corp., Miklas is known as Canada’s leading mansion–builder and his own Bridle Path residence was listed as the most expensive home on the Toronto market at $30 million. As a self-made millionaire, Paul enjoys investing in the startup market.