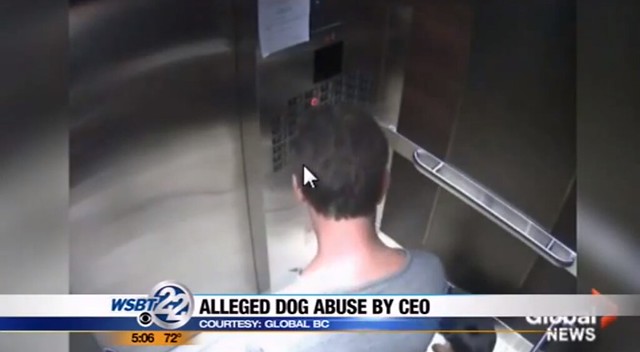 The chief executive officer of a multibillion-dollar company has been caught on camera kicking a dog and yanking aggressively on its leash.

The video, posted online, shows Des Hague, CEO of Centerplate, repeatedly kick a dog in an elevator inside a Vancouver condo building. The dog appears well-behaved—if submissive and scared—throughout the video, prompting criticism of the executive’s actions.

The company has fined Hague, who is donating money to establish a foundation to help animals in Vancouver, and who will also complete 1,000 hours of community service at an animal-protection agency. Additionally, reports suggest Hague will attend anger management counselling.

Hague is quoted as saying he is “ashamed,” noting that it was a friend’s dog and a “minor frustration” caused him to lose control of his emotions. Meanwhile, his company says Hague’s behaviour was “unacceptable” and is being placed on indefinite probation during which “any further acts of misconduct would result in immediate termination.”

Hague still faces potential charges in Vancouver, “where he is personally responsible for charges and fines in relation to the incident,” Centerplate added—not to mention major social media backlash.