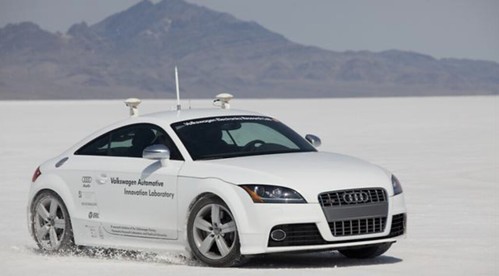 The technology for self-driving vehicles is already here.

Now we have to wait for laws and regulations to catch up.

Similar to the drone industry, laws—and society’s attitude toward certain ideas—are holding back the promse of next-generation technologies such as autonomous driving, according to a recent article in The Globe and Mail.

But when—not if—self-driving cars enter the mainstream, it could change how humans interact with their four-wheeled machines.

“With an autonomous car, you have perhaps a pet,” said Markus Auerbach, who heads the San Francisco research office of luxury auto maker Audi AG. It could be sent to pick up children at school, fetch groceries at a supermarket or drive off on its own to find parking after delivering someone to a downtown meeting where there is no parking nearby. “This is completely different behaviour. You have a completely different relationship to a car.”

According to Kanetix, one in four Canadians cannot wait for the day that driverless cars will be available,but almost as many say no thanks—they love driving too much.

“With companies like Google and major auto manufacturers obtaining permits to test autonomous technologies, these vehicles could be a reality in the next few years,” said Andrew Lo, Chief Marketing Officer and Tech Expert at Kanetix.ca. “While it is fun to imagine the possibilities these innovations present, we wanted to find out from Canadian consumers how they truly felt about the possibility of sharing the road with self-driving cars.”

The majority of Canadians are more tentative, with 52 per cent saying it would depend on the technology and how well it works before they would make a decision. Fifty-one per cent believe there will be fewer accidents, and 61 per cent think the elimination of risks like speeding and drunk driving will be the among the best outcomes of driverless vehicles.