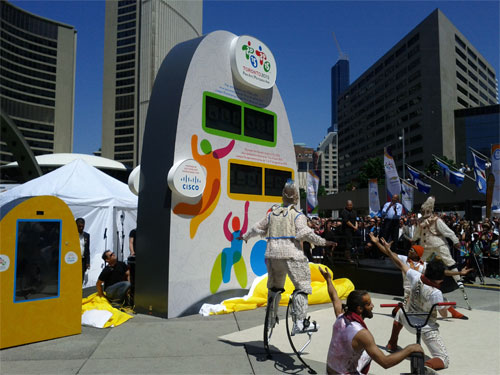 Recently representatives from Cisco Canada, CIBC and the Toronto 2015 Pan Am Games organizing committee, along with The Honourable Joe Oliver, Minister of Finance and Kathleen Wynne, Premier of Ontario celebrated the one-year countdown to the beginning of the TORONTO 2015 Pan Am/Parapan Am Games.

Revealed by an awe-inspiring performance by Cirque du Soleil (who will perform at the opening ceremonies), the made-in-Canada clock demonstrates the power of the “Internet of Everything” via an interactive platform. The innovative clock will count down the remaining days, hours, minutes and seconds to the Opening Ceremony for both the Pan Am and Parapan Am Games.

Pan Am Games fans, or “Panamaniacs” can take a picture at the photo booth beside the Cisco-powered clock to share via social media. The clock also has a touch screen display which allows fans to learn about the countries participating in the games and discover the various venues that will host the athletes next summer. You can also buy tickets directly from screen or find out how to become a volunteer.

Nitin Kawale, president of Cisco Canada says that “more ‘Internet of everything’ clock features will be revealed as we get closer to the start of the games.”

If you live in the Toronto area, you can still take part in celebrations including athlete demonstrations, sports activations, dancing lessons, a visual art battle and live musical performances.