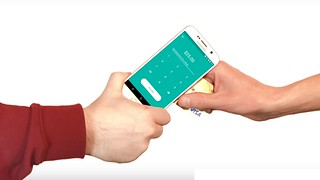 Paying other people – whether you’re buying a bike from a stranger on Kijiji or paying back a friend who picked up dinner – is usually done the old-fashioned way, in cash.

Now, one Montreal-based startup is looking to change that.

Montreal-based Mobeewave has launched a public beta of PayMeTap, an app that allows almost anyone with an Android phone to accept credit card payments with just a tap of the card.

“Is a way to get paid very very efficiently,” says Maxime de Nanclas, the co-founder and COO of Mobeewave.

The app uses the near-field-communication technology embedded in around 90 per cent of Android phones and found on contactless smart cards.

The person making the payment taps their card on the phone – like on a contactless payment terminal – and within 48 hours the money is deposited in the recipient’s bank account.

It works with both VISA and MasterCard.

What sets PayMeTap apart is that it’s not aimed at people who are selling a lot.

He sees it being used to pay back friends, pay a babysitter or pay for purchases set-up through sites like Craigslist and Kijiji.

But while de Nanclas says that Mobeewave’s market research shows that consumers are ready to pay for things by tapping their card on a phone, it might be a little more difficult to convince them to accept payments that way.

It’s a change he thinks will come, he says he thinks the convenience of a cashless future will win people over.

While the app is still technically in beta, it’s been in development for over a year. A major focus of that development has been security.

“You want your payments to be secure and you want people to trust your app,” says de Nanclas.

Currently, PayMeTap is only available in Canada. Mobeewave wants to refine the app and its go-to-market strategy before expanding to Australia and the United Kingdom, two other regions where contactless cards are widely used.

While the app is free, users do pay a transaction fee, which can be paid by either the payer or the recipient. For purchases under $15, it’s $0.50. After that it increases, capping out at three per cent for purchases of $100 or more.