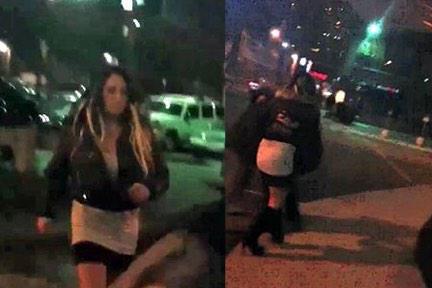 Inspired by the hit podcast Serial, a Toronto police detective is turning to Twitter in an effort to close a cold case.

Homicide detective Tam Bui started posting clues in early December, starting with a still from a surveillance video. Since then, he’s been posting more clues, mostly pictures of evidence gathered at the scene of the crime, every Saturday.

Do you know this woman? She might hold the key to Mike Pimentel’s murder newyear 2012 @ilibertyvillage #moretofollow pic.twitter.com/SMrQ8IE6sO

While it seems a bit like a game, it’s all very serious. The case, after all, is an unsolved murder.

Mike Pimentel was stabbed in early morning hours of Jan. 1, 2012 in Toronto’s Liberty Village, after he became separated from friends while heading home from a New Year’s party. He died in hospital later that day.

This isn’t the first time Toronto Police have asked for the public’s help in the case, in early 2012, police released a picture of a women they suspect was involved with the crime to local media. But that didn’t generate any leads.

“Rather than passively waiting for tips to come in, the police are bringing the evidence to people in a way that commands attention,” Steve Ladurantaye, head of news and government partnerships with Twitter Canada told the Toronto Star. “It only takes one person to solve the case and maybe they’re on Twitter.”

Since then, Bui has posted pictures of more clues on his Twitter feed – a hair extension believed to have come from Pimentel’s assailant, a pair of women’s shoes and Moroccan flag keychain – all marked with the hashtag #mikepimentelmurder.

#mikepimentelmurder~Who dropped these size 38 shoes, keys and hair extension on NY2012, What brand/make are they? pic.twitter.com/STlkJPIksK

“People have a real appetite for cold case and historical murder — that sense of injustice that time has gone by and the family’s hasn’t had closure — and there are often clues,” Bui told New York Magazine. “When our investigation stalled, one way we can try to move it forward is putting out information to the public.”

Toronto police say that they think they can leverage the popularity of the Serial podcast to grab the public’s interest.

“We were hoping that using the Serial podcast as a parallel to our investigation perhaps would spark interest in those who have been following Serial and they’ll say, ‘Hey, we have a real life Serial story in our neighbourhood so why don’t we start following this,” Detective Jeff Tavares, who works with Bui, told CBC Radio.

But it’s not just the public. Detective Bui has said he’s a big fan of the podcast and told New York Magazine he has “mad respect” for its host Sarah Koenig.

Serial doesn’t appear to the only pop culture crime phenomenon that Bui seems to be a fan of. He often Tweets pictures of real-life detective work with the hashtag #truedetective.