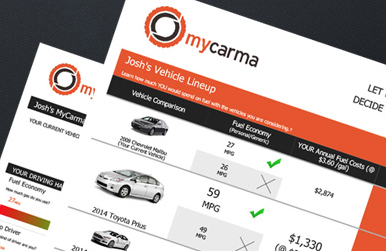 With a widening number of alternative energy vehicle choices, from natural gas powered, to hybrids, to electric, drivers now have more options than ever before when looking for a greener ride. But every company – or consumer – looking to purchase, must go through a difficult decision making process to determine which vehicle best suits their planned usage and driving habits.

CrossChasm, founded in 2007 by University of Waterloo engineering grads and ChallengeX (a competition sponsored by General Motors, the US Department of Energy), winners Matt Stevens and Chris Mendes is a company dedicated to making that decision process for fleets and consumers easier.

CrossChasm joined the Waterloo Accelerator Centre soon after the company’s inception. It then spent three years at the facility “learning to build not only a product, but also a business,” says company CEO Matt Stevens.

In about a year, the team launched their first product under the brand name FleetCarma, providing a patented turnkey system to help fleets looking to purchase alternative fuel vehicles accurately assess the total cost of ownership (TCO) of a vehicle, and make the best investment decisions based on how that vehicle will be deployed and driven, based on data logged from existing vehicles. FleetCarma has since expanded its product suite adding full fleet monitoring capabilities and electric vehicle monitoring, offering fleets complete vehicle lifecycle coverage from initial purchase to end of life decisions.

FleetCarma’s fleet review/total cost of ownership service called PredictiveTCOhas gained rapid traction in geographies where electric vehicles (EVs) are most popular, such as California and Europe and among electric utilities, who have a vested interest in converting their fleet vehicles to EVs, says CrossChasm’s CEO Matt Stevens.

“Local utilities—especially those in the US—are actually seeing demand for their resource decline, due to all the energy efficiency measures consumers have adopted,” says Matt. “So they want to add load to their system. Adding vehicles powered from the grid is incredibly exciting for them.” Stevens notes that utilities are working with FleetCarma to make sound purchasing decisions when migrating their own fleets to EV vehicles, and to assist their customers in doing the same for their move to EV.

For the consumer market, CrossChasm has created a variant of its total cost of ownership solution under the MyCarma brand name. MyCarma’s flagship product myLabel, offers up consumers the ability to compare fuel efficiency of various vehicles (not just EVs) by generating a free personal fuel cost report (called a personal label) to predict future fuel costs, using real-world data captured from a their actual driving habits.

“Data from dealerships where our data logger has been deployed is showing that on average, people will buy a vehicle that is 9% more efficient if you make a personal label,” says Matt. “9% may not sound like a huge difference, but for the OEM that is designing the vehicle, a 1% or 2% difference in fuel economy can be worth hundreds of thousands, even millions of dollars.”

“We are proving that OEMs can literally boost their sales of more fuel-efficient vehicles, without having to do a thing to the car,” he continued. “All they have to do is make fuel savings more personal for the driver. So when you show a car buyer a personal label that shows they might spend $30 more a month on their car payment, but save $75 or $80 in fuel, the decision is a slam dunk in favor of the more fuel efficient vehicle.”

CrossChasm is now planning further expansions to its FleetCarma and MyCarma brands. The company just completed a very successful Indiegogo crowdfunding campaign for myCarma to create the world’s first social electric vehicle logger, called myEV, to help consumers track energy consumption and battery state of health on nearly every production plug-in vehicle. And as its next act, CrossChasm is now developing -harging technology for the feet and consumer markets, to help utilities better manage and minimize the impact of EVs on the electrical grid.

Matt explains: “Typically car owners charge their EV overnight over a 12 hour period. But it actually takes only around three hours to fully charge a vehicle. Smart charging allows a utility to stagger that load, so vehicles aren’t all charging at once and putting unnecessary burden on the grid, with little to no impact to the vehicle owner.”

“To run smart-charging effectively, you need to understand the state of the vehicle and what that driver needs the vehicle to do,” says Matt. “It sounds fairly simple but in reality that’s actually really hard information to get. Fortunately for us, that is exactly what we do here at CrossChasm, so we’re in a good position to take a leadership position in this market over the next five years.”