We might as well call it the Digital Games of 2010 instead of the Vancouver Olympic Games.  Just days after Techvibes announced  the most ambitious Canadian broadcast strategy ever, it has been revealed that we will also be witnessing the most robust digital offering in Olympic Games history available on CTVOlympics.ca and RDSolympiques.ca.  2,350 hours worth of exclusive online coverage. 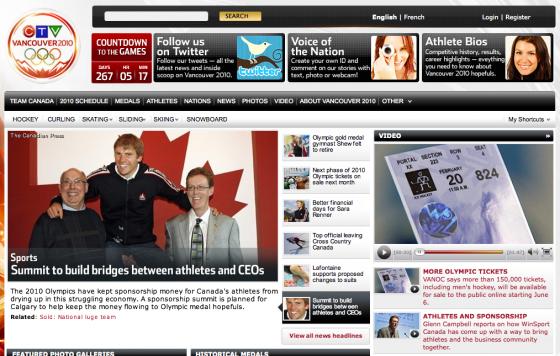 We all know that online viewership has been exponentially growing, and with more than 93% of Canadian consumers with access to broadband, this digital offering enables viewers to consume and control content in a whole new way.

What’s unique about our digital offering is that it’s pervasive and consumer-focused,” said Alon Marcovici, Vice President of Digital Media and Research, Canada’s Olympic Broadcast Media Consortium. “We’re making our content available everywhere to match consumers’ media consumption habits: online, as a mobile application, on social media platforms, and on video on demand. We are redefining how content is presented and putting Canadians in control of their own personal Olympic Games experience.

According to their press release, here is what we are being offered:

· Video – CTVOlympics.ca and RDSolympiques.ca, are the exclusive destinations for live streaming video of the Olympic Games in Canada. The websites will deliver up to 14 concurrent live streams, including live feeds from five of the Consortium’s networks (CTV, TSN, Rogers Sportsnet, V and RDS) plus up to 9 feeds from the world broadcast. The online video player will  stream video in HD and will have PVR-like functionality allowing viewers to pause, rewind and jump to key moments with one click of their mouse. The player will also have a variety of customizable options including overlays, breaking news capability, play-by-play integration and live blogs.

· Web-Exclusive Content – Not available anywhere else, CTVOlympics.ca and RDSolympiques.ca will have web-exclusive content including pre- and post-game coverage of Team Canada men’s hockey, Team Canada men’s hockey practices, full-length interviews with athletes and newsmakers, and behind-the-scenes footage. In addition, roving reporters covering the sights and sounds of Vancouver and Whistler will provide web-exclusive content beyond Games competition.

· Viewers’ Guide, presented by Bell – Launching February 1, the user-friendly interactive Viewers’ Guide will help visitors navigate their Olympic Games experience across the Consortium’s suite of television and digital assets. The Consortium’s complete broadcast and digital schedules will be updated throughout the Games and users can sort by network, day and time. Allowing viewers to set personalized reminders and alerts, the Viewers’ Guide will be the essential tool for maximum viewing enjoyment.

· Mobile – The mobile offering includes a unique mobile app available through the App Store, which currently features news, photos, athlete profiles, and the event schedule, which will include live results, medal standings, live blogging and sports alerts and reminders. CTVOlympics.ca and RDSolympiques.ca are also available in a mobile-optimized format while exclusive live video streaming of the Consortium’s event coverage will be available on Bell Mobility devices, including live coverage of the Olympic Games hockey tournaments, hourly video updates, event recaps and highlights.

· User-Generated and Interactive Content – Canadians will have their voices heard through an abundance of user-generated content initiatives on CTVOlympics.ca and RDSolympiques.ca:

o You Call The Play – users call the play-by-play of classic Olympic Winter Games moments, as well as key moments from Vancouver 2010

· Social Media and Beyond – With fan pages on Facebook at facebook.com/CTVOlympics and facebook.com/RDSolympiques and regular Twitter updates at Twitter.com/CTVOlympics and Twitter.com/RDSolympiques, a YouTube channel at youtube.com/ctvolympics, live blogs, widgets and Internet Explorer 8 slices, fans have an unrivaled number of creative and unique ways to experience the Games. Fans can also use Facebook Connect and Windows Live Messenger to share their experience with friends

Will you be following the Olympics?  What do you think of this unprecedented digital offering?

Comment below or email me at  karim at techvibes dot com.