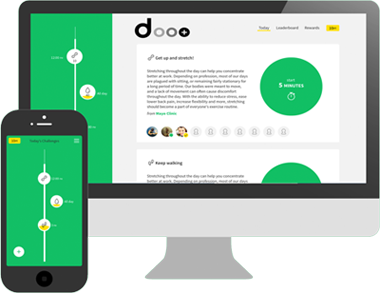 When corporate wellness firm myHealthSphere launched their Dooo office health and wellness platform in December of last year, CEO Jane Wang always knew she wanted to launch a mobile app to go with it. But because their pilot back in June saw 85 per cent of their six companies and 200 users accessing the program through their desktop app, Wang figured that they should perfect that first.

“The recent clients that we’ve had now are in retail,” Wang says. “These people are mobile users rather than desktop, sedentary users.”

Five months later, myHealthSphere has released the mobile companion app to go with the desktop platform. Dooo allows professionals to stay connected to their wellness goals throughout the day at work – though the organizations (myHealthSphere call them “movements”) they work for set the overall plan for their employees, users can customize their programs to suit their own schedules and choose different categories of health content.

Once they create their fitness program, users receive notifications and reminders on their computers (and now, also on mobile) to do things like drink water and try new yoga poses together. The completion of tasks allows them to earn points that are redeemable for prizes like athletic gear or even Coach purses through the Dooo platform.

The platform also promotes overall health outside of getting fit with notifications for small tasks like washing their hands as soon as they get into work so that they don’t spread germs from public transportation or outside, or giving telling users to give themselves a two-minute hand massage during a meeting where they’re typing a lot to prevent carpal tunnel. This is one of the things that separate Dooo from conventional fitness apps, as Wang says Dooo is about habit building.

“It’s about giving them a process or a habit so all of these small little things can contribute overall health,” Wang says. “So maybe every time you get an e-mail, you could flex or engage your abs.”

Wang says that Dooo is something that nobody is really doing because it takes into account the reality of working in an office or having an extremely busy lifestyle. Because of the simplicity of the program and the fact that the platform has seen 80 per cent engagement over 120 days among the companies that use it so far, Wang hopes that it will eventually become an everyday part of corporate culture, like Microsoft Word or e-mailing.

“We all know what we need to do to be healthy, but we just don’t make the time or give ourselves that context to be able to do something,” Wang says. “With Dooo, it’s a coach that gives your contextually relevant challenges that you can do during the day.”