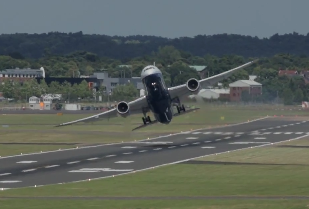 The airline performed a difficult maneuver landing its new 787-9 Dreamliner on a runway before quickly taking off again during what’s called a touch-and-go. You can watch it after the jump, starting at the 1:10 mark.

Air Show authorities have said that the move was not safe due to the wing coming too close to the ground as the jet quickly turned while steeply rising back into the air. They’ve banned both Boeing and competitor Airbus from performing the move again.