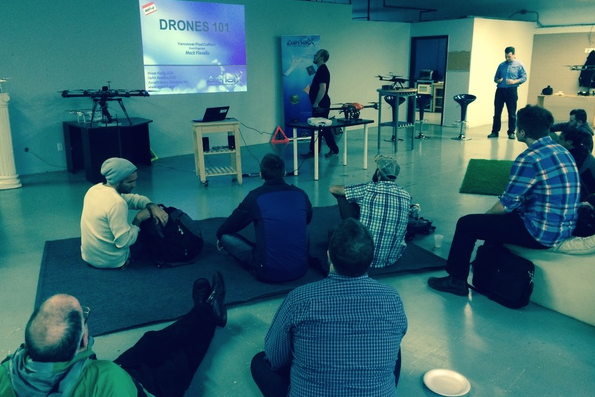 The skies were not friendly on Wednesday night. Thick rain pounded the Mt. Pleasant pavement. The heavens were no help to those who didn’t know to sneak around to the backdoor of the non-descript building on Third Avenue to get out of the torrent and into the event.

Mack Flavelle is a very familiar face to those involved in the Vancouver tech ecosystem, but he hasn’t hosted in event in quite some time.

“I really wanted to know about drones and Twitter wasn’t telling me,” Flavelle shrugs. “The speakers reached out, I got the calls from people saying they could reach out.”

Flavelle’s blase demeanour has more to do with experience than derision. And it showed through the smoothness of that night’s presentation. If an attendee was not a member of the Pixel Crafters Meetup Group, they might never have known how improvised the event was.

Wednesday night’s Pixel Crafters event, helpfully titled “Drones 101,” featured an introductory lecture on the construction, usage, and growing popularity of drones delivered by Noam Kenig from AerialX, and a panel discussion that brought Paul Bennet and James McCartney to the front of the crowd.

Drones grow in popularity each and every month, and their uses proliferate. Kenig’s 101 lecture outlined the way that drones are growing commonplace in industrial workplaces. From crop monitoring to building roofs, surveying, meteorology and cinematography, drones are contributing to the greater good. Canada’s temporary regulations were reviewed, as were industry trends towards miniaturization, efficiency and reliability.

Similar to an ideal drone, the audience for the night’s event was small but determined. Many sat on athletic mats on the floor; others shifted awkwardly from side to side, staring at the drones with ill-disguised hunger, hunger that the bags of caramel corn and Lays failed to abate. Drones on display ranged from the size of a thumb to the size of a gramophone. Due to inclement weather—and surprisingly strident laws—the only drone flights that night were performed by small remote controlled vehicles the size of miniature staplers.

As much as the actual lecture informed the audience on the current industrial practices and priorities of drone consultants, the panel created a context for these professionals to set them apart from the drone pilots dreaded on Kits Beach in the summer. Contempt for drone hobbyists dripped from the mouths of the speakers. Vancouver has very strict laws for drone flight; if a drone is to be flown in downtown, for example, the entire block needs to be closed for safety reasons. Their scorn for ignorant hobbyists was only equaled by their joy for professionalism: companies using drones to improve their businesses and thus the world.

“They’re now using drones to get there in the right place the first time, saving 50% of fuel burn trying to get in the right position, so there are environmental improvements. There are upgrades for large industrial applications. I see in agriculture that people will pay $1200 to use a plane for a couple hours–or they could spend $100 to use this,” McCartney says, sweeping his hand past a small orange drone. It’s a top of the line drone in 2014.

And what can drone aficionados and acolytes look forward to next year?

“Under two kilograms are going to be approved to fly legally. Proper regulation is coming down the pipe in 2015, so the whole Peeping Tom problem…there’ll be a requirement to have visible numbers, same as a plane, and if you can’t see that, you know it’s illegal, and it can be reported and you can take it down. There’s a lot of stuff coming down the pipe next year.”

Attendees quickly tried their hands at flying the little white drones. They buzzed like dragonflies—only twice in half an hour did I see one scatter its way to the ground. The controls were easy to pick up; the drones picked themselves up with the same ease.