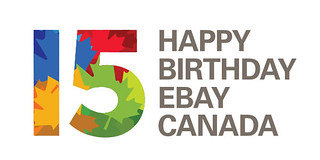 This month, eBay is proudly celebrating 15 years in Canada. In 2000, as Canadians were recovering from Y2Khysteria, eBay.ca launched and has been changing the way Canadians shop ever since.

Over the past 15 years, eBay has transformed the way Canadians buy and sell goods. eBay’s global marketplace continues to connect buyers with the things they need and love and sellers with consumers around the world. Buyers have learned that no matter where they live, and regardless of time of day, they can shop when inspiration strikes. Sellers, meanwhile, have tapped into eBay’s potential to deliver sales, new customers and even new markets. They have used eBay.ca to complement their brick and mortar locations or existing e-commerce sites.

“The arrival and evolution of e-commerce has profoundly shaped the Canadian retail landscape and eBay is proud to have led the way,” says Andrea Stairs, Managing Director, eBay Canada. “Today, eBay is the second largest e-commerce player in Canada and we remain committed to supporting buyers and sellers across the country.”

Within 15 years, eBay has grown to more than eight million visits per month. During that time, more than 11 million Canadians have purchased more than $10 billion worth of toys, handbags, car parts, and more on eBay. Now a powerhouse in Canadian retail, eBay facilitates more than $1 billion in Canadian trade every year.

“Beyond changing the retail landscape, we are so proud of the role eBay has played impacting Canadian lives,” said Stairs. “The stories of eBay users – whether the collector finally connected with his cornerstone piece or the mum who started a business from her basement – are tangible evidence of the power of eBay’s technology.”

From auctions to retail powerhouse

Since 2000, eBay has evolved significantly from its start as a marketplace selling predominantly used inventory at auction. Today, eBay is home to well-known brands, retailers and sellers of all sizes. Now, more than 80 per cent of purchases made by Canadians are for new products, and 75 per cent are made at fixed prices.

Since launching the first eBay app, Canadians have gone on to buy everything from houses to a helicopter using eBay and their mobile devices. Today, a pair of women’s shoes is bought via mobile every four minutes in Canada and a handbag every five minutes.

“Mobile has revolutionized the way we think about shopping and at eBay we’ve seen a dramatic rise in the number of Canadians buying on their mobile devices. We are the mobile e-commerce leader in Canada, and around the world, with more than 50 per cent of transactions having a mobile touchpoint,” said Stairs.

Entrepreneurs are at the core of eBay’s continued success in Canada. eBay’s technology provides small business owners with a newfound global reach that extends far beyond traditional export channels. Today, 99.5 per cent of eBay entrepreneurs are engaged in export, reaching an average of 19 markets.

In 2010, eBay Canada spearheaded a national initiative to support up-and-coming Canadian designers by providing them access to eBay’s global marketplaces. Since then, eBay has collaborated with notable designers including Preloved, Dean Davidson Designs and VAWK.

eBay Canada thanks its community

To celebrate its 15th birthday, eBay is offering a series of deals, contests and giveaways to thank eBay buyers and sellers for their support over the past 15 years. Visit www.ebay.ca/giveback for all of the details.