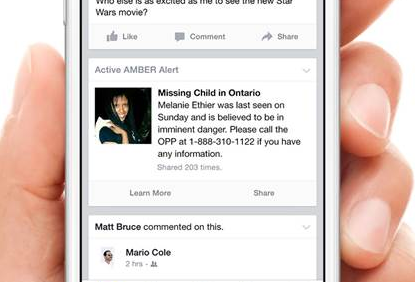 The feature will send alerts to the Facebook community in the first critical hours after a child has been abducted. The alerts will provide comprehensive information including a photograph and all available details about the abducted child on Facebook’s mobile News Feed. The Alert will only appear in the feeds of people who are in the designated search area and users will be able to share the Alert easily and instantly with friends and family.

“We know that when a child is abducted, the most valuable thing we can do is get information out to the public as fast as possible,” said Jordan Banks, Global Head of Vertical Strategy and Managing Director, Facebook Canada. “By getting the right information to the right people at the right time through targeted AMBER Alerts on Facebook, we hope to reunite missing children with their families faster.”

According to the RCMP, between 2003 and 2012, 96% of children who were the subject of an AMBER Alert were returned safely to their families.

“When a child disappears, every second counts and statistics have shown that the rapid dissemination of information greatly increases the chances of locating a missing child, safe and sound,” noted Pina Arcamone, Director General, Missing Children’s Network.

Facebook launched its AMBER Alert system in the United States on January 13.

“I applaud the launch of Facebook AMBER Alerts, a new tool that will mobilize the online community to help locate abducted Canadian children,” said the Honourable Steven Blaney, Canada’s Minister of Public Safety and Emergency Preparedness.