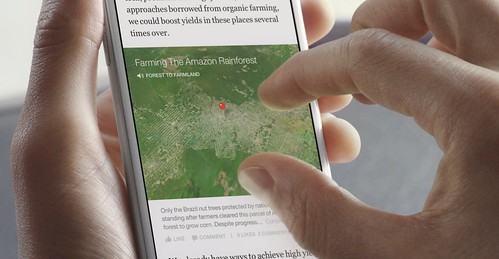 This week Facebook launched its Instant Articles feature in Canada with Le Journal de Montréal and Le Journal de Québec, as well as several Rogers Media brands to be added before the end of this year, including Chatelaine, Maclean’s and Sportsnet.

Currently, the average news story takes an average of eight seconds to load, by far the slowest single content type on Facebook. Instant Articles makes the reading experience as much as ten times faster than standard mobile web articles. Every Instant Article has a lightning bolt, so when you see that lightning bold in News Feed, you know it is going to have a fast, interactive experience.

Along with a faster experience, Instant Articles introduces a suite of interactive features that allow publishers to bring their stories to life in new ways.

“Expanding Instant Articles to Canada, starting with Le Journal de Montréal and Le Journal de Québec, which are going live today, and Chatelaine, Maclean’s and Sportsnet, which will begin publishing soon, is a significant milestone for the product” said Andy Mitchell, Director of Global Media Partnerships, Facebook. “Instant Articles has been designed with extensive feedback from publishers, and we’re excited to bring this collaboration to our publishing partners in Canada to help them distribute fast, interactive articles to their readers in the Facebook app.”

Le Journal de Montréal, Le Journal de Québec, Chatelaine, Maclean’s, and Sportsnet were part of an invite-only beta for publishers in Canada. Additional publishers who have signed on to Instant Articles and will start to roll out in the early part of 2016 include The Canadian Press, Diply, Global News, The Globe and Mail, Postmedia Network, The Toronto Star and CKNW.

Instant Articles is now available to all iPhone and Android users.