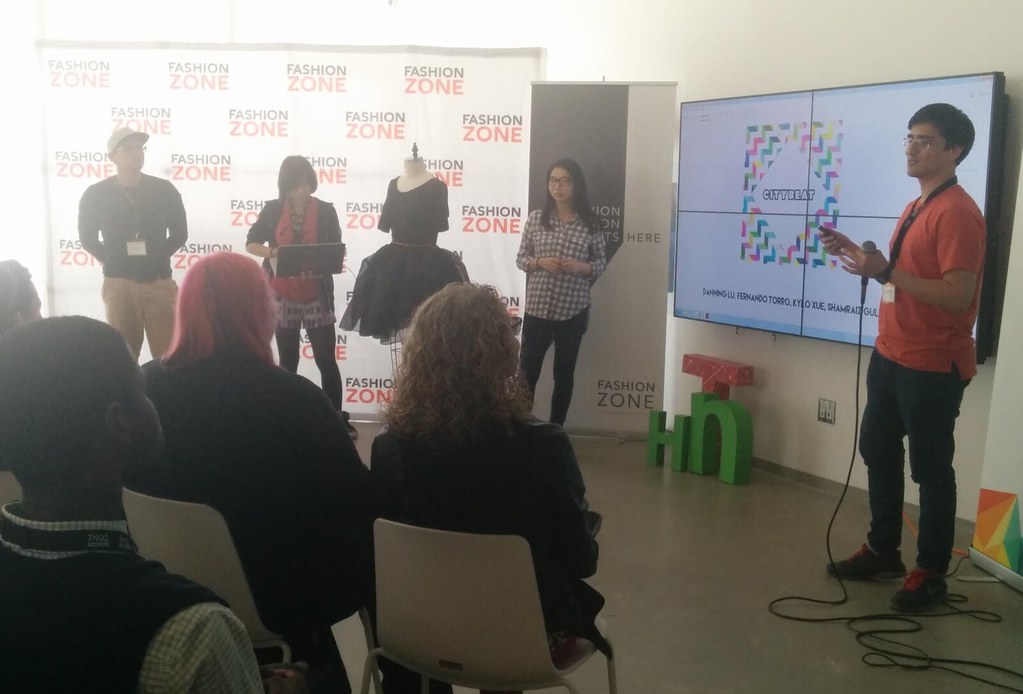 On Sunday, the final day of the Fashion Zone Hack’N’Talk, at least nine groups who spent an entire weekend building wearable technology that was both innovative and fashionable got the chance to present before Feedback Experts, who used their expertise to help the groups hone their craft.

This year’s Hack’N’Talk was only the second from the Fashion Zone, one of seven Zones at Ryerson University. It also highlighted the fact that, as wearable technology become more appealing to the average consumer, fashion is continuously playing a bigger role in its development. One of the major focuses of the event, says organizer Kimia Kabiri, was seamless integration.

“What we mean by that is that the technology should just flow. The technology part of the gadget should work with the design part, and be something that people actually want to wear,” she says. “I think mass consumers only really know about things like the Apple Watch, but if you look there are other types of wearable tech.”

The people at the Fashion Zone, with hackathons like this and as an incubator on its own, hope to show that wearable tech isn’t just for hardcore techies.

“This really came out of earlier activity within the wearable tech sector, in that it seemed to be quite gadgety and users didn’t connect with them in a way that was going to make them more useful,” says Robert Ott, chair of Ryerson’s school of fashion and the director of the Fashion Zone, about the Fashion Zone’s creation. “We thought, what is the role of fashion in getting wearable technology at a much higher acceptance level?”

As the Hack’N’Talk weekend saw people without deeply-researched, formal business plans come together to create a startup, it exemplified how the Fashion Zone is establishing itself as a prime destination for those who want to make fashionable wearables, but don’t necessarily know where to get started. Though there are incubators like the Toronto Fashion Incubator, these are mostly for people who have a better understanding of their business, and may be difficult to reach for people who have unique ideas like an innovative business plan. This is the exactly the gap that Olga Okhrimenko, a managing director of the Fashion Zone who helped found it as a student, hopes to address.

“If I’m starting a sustainable project, or if I have an innovative business model of my company, it’s difficult to get into these incubators,” says Okhrimenko. “Even if they apply to some business centres, they still have the challenge of trying to find advisors who will be knowledgeable about the fashion industry.”

The groups presented on Sunday before Pearl Chen, the founder of Karma Laboratory; Lucia Del’Agnesse, associate chair of the school of fashion at Ryerson; Helen Kontozopoulos, co-founder of SmartLaunchVC; and Okhrimenko. The groups varied between the functional – such as Dry Armour, a device that can help you identify sweatness levels, as well as a group that made an NFC accessory that turns any watch into a smartwatch – to fashionable, like the City Beats group that made a skirt that lights up in certain regions that represent regions in Toronto; the number of lights depend on the number of events in the city.

Ott says that this intersection between fashion and wearables will only get stronger.

“I think what was lacking was the coming together of various people that have different expertise to really develop the idea of wearable tech,” he says. “If you work with a group of engineers, coders, fashion designers and business people and collaborate you don’t have to rely on what already exists, you can create a totally new prototype.”