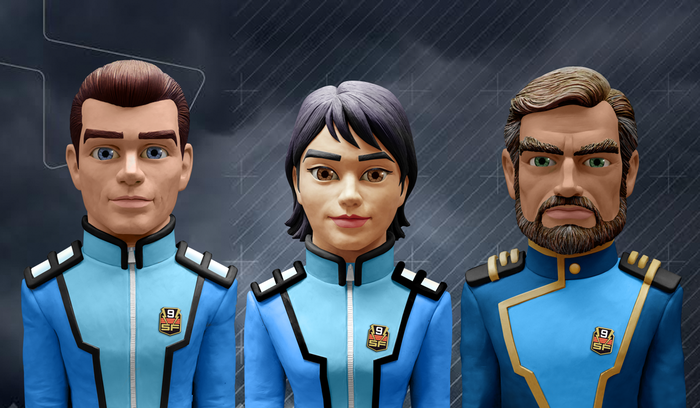 Vancouver’s renowned for being a centre of both science and art. It’s earned the name Hollywood North, with its incredible pool of creative talent and enough pundits have called the region Silicon Valley North for it to be an acceptable sobriquet too. The two go hand-in-hand, inspiring the other to even greater heights.

Vancouver’s had a hand in the science-fiction game for a very long time. From the foundation of Mainframe (now Rainmaker) Entertainment to serving as the homebase for Sliders, Smallville, the best seasons of the X-Files, the X-Men movies, Stargate, and of course, Battlestar Galactica.

Now the locally-based concept artist that brought the Cylons to the twenty-first century is invigorating another old-fashioned science-fiction world. It’s been nearly 50 years to the day since Thunderbirds, the English science-fiction/action-adventure marionette program first aired. Gerry Anderson, the series’ creator, has passed, but his son has taken up the mantle to revitalize the technology. Supermarionation is now Ultramarionation; Stingray or Captain Scarlet and the Mysterons is now Firestorm.

The Kickstarter surpassed its initial goal mere days into the campaign; now, it’s just a matter of how much of Eric Chu’s work viewers’ll be able to see. He’s not the only Canadian involved. Thunderbirds stars Shane Rimmer and Matt Zimmerman—both hail from Ontario. He is the only British Columbian, though. Firestorm is a change of pace for Chu; a cursory look at his previous design work wouldn’t indicate that he’s the right man for the shining, retro-futurist world of Gerry Anderson. So what made him take the project on?

“Fatherhood. I’m looking what’s available for kids these days, and it’s all CG animated, and that’s good too.” Chu sighs with distaste before he continues. “I miss the non-polished stuff, the stuff that hasn’t been formulated to death. And when you get into independent films, there’s that sort of charm. [Independent filmmakers]—they were taking more chances. They didn’t have a whole group of producers producing things to death.”

“Because Firestorm is not being produced by a huge studio, I think we can hang onto that spirit,” Chu says. “We’re not being told this is going to offend people. We don’t want to do this, we don’t have to listen to focus groups. We can make it the way we want to do it, and I think the key for coming up to a show thats popular is to please yourself as a filmmaker. Don’t try to run after the crowd. Let them follow you.”

And people are following. With two days left on the clock, the campaign’s far surpassed its goal. Each stretch goal adds another scene to the episode.