Hollywood flick The Social Network ranked #1 last weekend, pulling in $23 million (roughly half its budget) in its opening three days. It deserves that and more, as it is a legitimately good film, even if Zuck himself doesn’t give it his blessing.

Following the movie, lots of people have being racing to sites like Facemash.com, searching Facebook for Zuck’s ex-girlfriend Erica Albright, and Googling the “Winklevi” twins.

Well, before we even get into the list, we’ll cover some basics: Facemash.com wasn’t renewed when it’s domain registration ended in 2007. As soon as Mark lost ownership of it, it was purchased immediately and now, with the movie’s popularity skyrocketing the website’s traffic, is up for sale. It should fetch upward of $35,000, but it certainly won’t reach $200,000 which is the price tag that Zuck paid for Facebook.com to replace TheFacebook.com, which Napster founder Sean Parker wasn’t a fan of.

As for the Winklevoss twins… yes, they’re real, and they are actually very tall and handsome, too. They even still row for Harvard competitively. Oh, and a little known tidbit: the twins were played by a single actor (Armie Hammer)!

Now, satisfy other curiosities (including ones you didn’t even know you had!) with these five follow-up facts to the film. 1. Eduardo Saverin is a billionaire.

Many left the movie wondering how he’s doing today. Well, while the affable CFO of Facebook seemed to get the blunt end of the stick during Facebook’s beginnings, but he’s doing okay these days. Thanks to a 5 percent share in Facebook worth more than $1 billion, plus an undisclosed private settlement following his lawsuit, you can’t really feel too sorry for him.

You won’t see him featured on any celebrity mansion shows in the near future. Rather surprisingly, Zuck has yet to spring for an expansive country cottage or string of major-city condos. He still rents a relatively modest house as opposed to owning myriad mansions. Well, whatever suits him, right? He probably isn’t there very often, anyway.

It isn’t brought up in the film, but the angel investor who gave half a million dollars to Facebook as startup capital, Peter Thiel, is a co-founder of worldwide online payment phenomenon PayPal. Whew, him plus Sean Parker? Zuck wasn’t in the grasp of small hands. 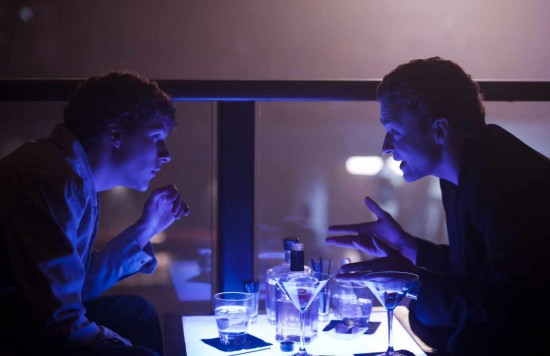 We know of the select few folks with shares in Facebook thanks to the movie, but of course there are more private deals done. For a mere $240 million, Microsoft Corp. bought 1.6% of Facebook. The ink flowed in 2007, which by today’s terms is a steal. The deal provides Microsoft with some third-party advertising rights.

Picture Mark and Erica’s impassioned conversation in the musky lounge of Harvard’s Thirsty Scholar Pub. Now picture that 98 more times. Yes, it’s been reveald that opening scene took 99 takes for director David Fincher to be satisfied. There was some peer pressure to go once more to hit the triple-digit mark, but no dice from David. Gretzky’s jersey number was it.

If you have any other facts about Facebook or the movie you find interesting, let us know in the comments section!