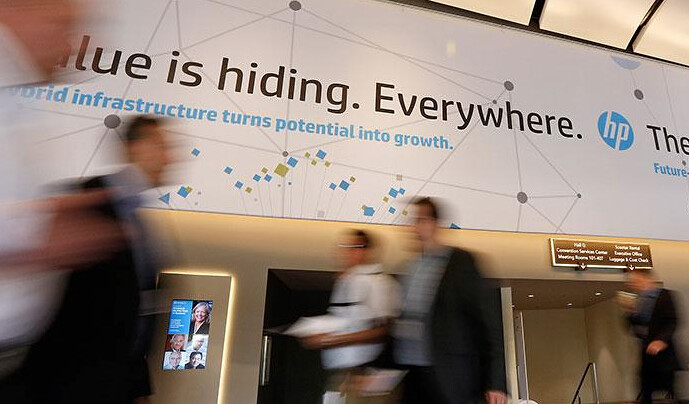 I overhear two men talking in the elevator. We need to create a sense of urgency, one says.

“But how do you turn the whole company around overnight?” the other asks.

It’s a tough time to be a large enterprise in the tech business. These days it’s disrupt or be disrupted.

Disruption certainly seems to be on everyone’s minds at HP Discover, the company’s annual event for its business customers.

CEO Meg Whitman talks about it a lot during her keynote speech. She uses Uber as an example. Cab companies had time to adapt, she says, but they didn’t. Instead they kept using CB radios.

Some of HP’s customers will be the next disruptors; others are trying to fight them off.

“We have some very traditional customers and we’re helping move them into the new world, we’re helping them avoid the disruption,” says Mike Nefkens, HP’s executive vice-president of enterprise services. “Then we’ve got other customers, which are new customers, the disruptors of silicon valley who we’re partnering with to help them go disrupt traditional industries.”

For HP, the approach is a hybrid one. There’s lot of talk about private clouds and managed clouds but also about new high-capacity flash storage offerings.

There’s no promise of a one-size-fits-all solution.

“One of the big things we do is we give our customers choice,” Nefkens says. “We need to be careful, because if we make ourselves completely HP-cloud-only we will miss out on helping our customers modernize.”

It’s an approach that means competitors in one line of business, like Amazon and Microsoft, are partners in another. The company sells orchestration software, which integrates with other company’s cloud offerings.

“We want to be the transformation partner for our customers, taking their apps to the cloud and that means any cloud that provides the right return,” he says. “We are by no means saying that it has to be ours.”

“There’s been a big shift,” Nefkens says. “Two or three years ago, everyone was like let’s just get in the cloud and the big change is that people are finally realizing that the infrastructure that’s running that cloud matters … our infrastructure is the best in the world and it powers the majority of the clouds out there.”

But the focus on disruption doesn’t just apply to HP’s customers.

“We’re doing the same to ourselves,” Nefkens says. “We’re reinventing ourselves.”

In November, HP will split into two separate companies, HP Inc., which will sell printers, personal computers and devices, and HP Enterprise, which will focus on infrastructure, software and services for business.

It’s a change that company executives say will make the company more agile and more focused.

And in some markets, HP is the disruptor.

Saar Gillai, the senior vice-president and general manager of HP’s Network Functions Virtualization business unit, says that’s what he’s doing. NFV is essentially the “IT-ification of telecoms,” he says, replacing specialized hardware with software that can run on any system.

It’s a big opportunity he says, network “traffic is growing exponentially” and telecoms “have to find ways to be more efficient.” But the shift will mean margin compression for networking equipment makers.

“If you’re an existing player in this market,” Gillai says, “you’re not in a hurry.”

For HP, on the other hand, it’s all new business.

“We’re going there as fast as possible,” Gillai says.