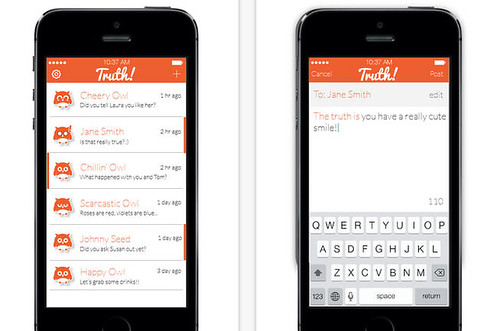 Foro Technologies this week announced the launch of Truth, which it claims is the first one-to-one anonymous peer-to-peer messaging app amongst friends.

The startup also announced it has joined Montreal-based accelerator FounderFuel.

Truth, available for iOS, lets users pick a friend from their phone’s contact list and send them an anonymous message directly. The sender’s identity is masked  so the receiver doesn’t know who sent them the message.

“Unlike the Twitter-esque broadcasting model of recent anonymous apps, Truth is about messaging with people that you actually know and care about. The people that are in your address book,” said Ali Saheli, cofounder of Foro. “The result is a powerful one-to-one communication platforms that is far more engaging and meaningful than anything we have seen out there.”

“The idea of Truth came to us by watching user behavior on services such as Whatsapp and Snapchat,” added Bio Cho, cofounder and CTO of Foro. “But with Truth the context of the messages actually prevails over the content because you can only share with people in your address book, and so far that has proven to be a powerful differentiation that our users loves.”

“The desire to maintain anonymity online is growing exponentially online,” noted Ian Jeffrey, General Manager of FounderFuel. “We’ve known the team at Foro Technologies for a while and are very excited by their approach to helping people speak the truth online.”