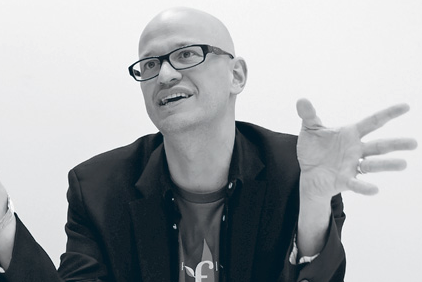 The announcement that the Founder Institute is setting up in Montreal heralds a new wave of mentors, and startup knowledge headed towards Canada. It’s an exciting development for the local startup ecosystem, and for the country as a whole.

We interviewed Adeo Ressi, the head of the Founder Institute, for some perspective on what he was looking to do in Canada.

The first thing he notes is that Montreal is but a catalyst for further expansion into the country, and he chose it because he knew there would be a strong team in place with lead organizers Sergio Escobar, and Busbud founder LP Maurice. He’s bullish that there will be several locations in Canada by the end of the year, and he’s already looking to other cities because he believes Canada has a strong startup ecosystem, and the right mentality to grow startups further.

The Founder Institute is well known for its’ key performance indicator of creating a million jobs around the world through the creation of new enterprises. In each city they go into, there’s a focus on making sure that opportunities created by these new enterprises encompass as many people as possible. In line with this theme, three standard scholarships, the Female Founder Fellowship, the Applicant Distinction Fellowship, and the Jeune Chambre de Commerce de Montréal Distinction Fellowship are offered to those who apply before the early deadline March 23rd. This will make the Founder Institute accessible to all Montrealers.

Adeo is optimistic about Montreal. He thinks there is a large multicultural talent pool that is very well educated, a factor for success. Montreal has already produced significant traction, with enough people interested to place it near the top of the cohort of cities Founder Institute has recently launched in.

Adeo knows this because the Founder Institute is like the pizza-maker who eats his own pizza. The program focuses on creating data-driven companies that can dominate their field, and they practice what they preach, meticulously poring over information from all of their cohorts and startups to untangle the best actionable points moving forward. They have psychometric data on all of their applicants, and want to apply the aggregated insights to create an exploration of what a good entrepreneurial profile would look like.

Adeo sees that profile as a formula that combines the passion and conviction of the entrepreneur, and the caliber of their idea, which is somewhat related. On that note, Adeo notes that the mistake entrepreneurs often make is of seeing the problem from their perspective, and not from the consumer’s point of view. Founders often explain why their idea has to exist based  on a systems point of view rather than walking through the story of an individual user, and why they have to use their product.

This, coupled with confirmation bias that seeks affirmation rather than reasons for why an idea is bad, can often mean the death knell for young enterprises. Adeo wants to help entrepreneurs avoid that fate.

He wants to remind people that even though he sounds this cautionary note, he still fundamentally believes in trying and growing ideas. He makes the point that it often takes three years of hard work to see if an idea is a good one. It takes five years to see if it can be a business. It might take ten years to see if this is a world-dominating business. Look at Google, Adeo points out: they were running years without a viable business model.

It’s an interesting, original thought, which is something the Founder Institute thrives with. It’s a model that has worked with many notable graduates, including Udemy, one of the icons of online education. The Founder Institute loves to experiment and record the data that ensues.

One of the unique experiments the Founder Institute is running involves a graduate liquidity pool, where every startup in the same cohort gives a bit of their equity to a shared pool that reduces financial risk. This allows people in the same cohort to get a bit of return if one of their fellow startups makes it big. It’s an interesting feature, and as a side effect, many of the mentors and startups that are part of this pool have a very strong sense of camaraderie. Adeo reports that some of the fiercest competitors in the same industry have shared tips with one another because they graduated from the same cohort.

It is this same spirit of innovative, data-driven collaboration that Adeo hopes to bring to Montreal, and ultimately, the rest of Canada.