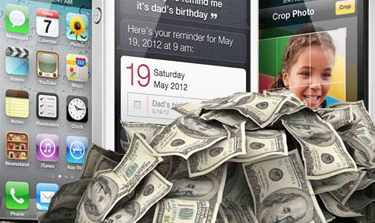 Driven by sales of more than 61 million iPhones, Apple generated $58 billion in revenue for its second fiscal quarter of 2015.

Revenue was up more than $10 billion from the year-go quarter, and iPhone sales were the strongest ever for a non-launch quarter.

Below are four big numbers related to Apple’s quarter.

That’s how much revenue Apple generated per week during its last fiscal quarter—approximately the net market value of BlackBerry.

That’s how much cash Apple now has on hand, despite returing tens of billions of dollars to shareholders. That’s the value of nearly six Twitters or LinkedIns, or more than half the total value of Google or Microsoft—in cold, hard cash alone.

That’s how much Apple is valued at today. It’s the most valuable company in the world and, if growth continues, could be the first company ever to reach a trillion-dollar valuation.