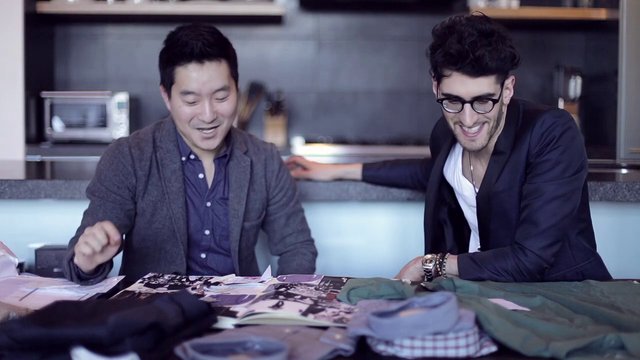 Ethan Song doesn’t mince words: he always had a business-to-consumer enterprise in mind. He acknowledges there are great business-to-business enterprises out there, but his passion has always been reaching out to consumers. He doesn’t want to be an intermediary. He wants Frank & Oak to be an integrated platform that delves into all the elements of e-commerce because that is where his passion lies.

It is the sort of candid insights that Startup Grind is good at getting out of entrepreneurs. The one-to-one focus often brings out a lot of useful, and actionable advice from people who are living through the daily startup grind—every day of their lives.

Ethan’s lived through it, and continues to live through it. He maintains that passion is important to thriving amid the daily stress.

He’s also a big fan of having a co-founding team of at least two to survive the grind. This makes sense given that his collaboration with his COO Hicham Ratnani has led to the success Frank & Oak has enjoyed. Ethan makes the point that when you’re on your own, it’s harder to make decisions. Ideally, you have to have somebody who is with you all the time, so that you can bounce ideas, and get support at every step.

The collaboration between Ethan and Hicham has worked so well because they have known each other for a long time, dating back to high school, and their time together as Deloitte consultants. They don’t really often have arguments because both of them understand the long term vision of Frank & Oak. Their skill sets complement each other to help Frank & Oak reach that pinnacle.

It’s hard not to see that when Ethan talks about getting to know your co-founder, and taking a leap of faith for them, he’s advocating for something that has worked for him.

Still, even with all the sales Frank & Oak has garnered, Ethan still doesn’t consider them to be completely successful. He brings up the point that a startup has no end-point: you’re constantly iterating on your way to perfection. And nobody can ever be perfect.

As a quick example, Ethan talks about how the transition to mobile is completely taking e-commerce sites by surprise, and shifting the rules of the game completely: even if you were close to perfect then, it’s unlikely you still are now.

The story Ethan brings the jam-packed room is one of constant change, and improvement.

The narrative Ethan is weaving is a compelling one, but it is important to note how far Frank & Oak has come on that quest. Hicham and Ethan first started Frank & Oak as ModoSuite, a company that focused on producing custom shirts. They received investment, and then decided to pivot entirely, bringing their investors with them: no easy task as they were switching companies on their investors. Eventually, Frank & Oak garnered a massive mailing list, and launched with overwhelming demand. Inventory was a problem: at times, they only had a single rack with a few items holding up what looked to be a massive store-front.

It was the metric of potential sales Frank & Oak was missing out on that finally ensured their investors would be entirely on board with this new venture. Now, Frank & Oak is a pillar of the Montreal startup community.

Ethan ends on one point: his story can be all of ours. He doesn’t think there’s anything special that makes for an “entrepreneur,” some mysterious mix of nature and nurture. All of us have the potential to create something, and iterate on it until it resembles the vision we set out for it.

It is a thought that lingers as people begin to get up to network with one another—perhaps to find their ideal cofounder, and start the next venture that will mark Canada’s startup scene.