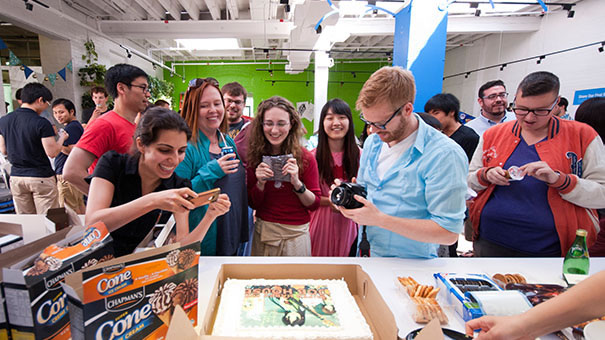 Fun might not be the first word that comes to mind when you think of accounting software, but it’s a big part part of the corporate culture at FreshBooks.

The developer of cloud-based accounting software is one of the finalists for Employer of the Year in the Canadian Startup Awards.

“One of the values here at FreshBooks is fun,” says Tracey Mikita, the company’s vice-president of human resources. “We don’t take ourselves too seriously.”

It’s a tone that’s set at the top.

“Having fun at work is a value that Mike McDerment, our CEO, is very passionate about,” Mikita says.

It’s part of encouraging an atmosphere of camaraderie and friendship between employees. To support that the company has clubs, sports teams and even a choir.

“One of the really amazing things that the company does is that once a year everyone goes up to Muskoka,” Mikita says. The company rents out a kid’s camp and for the get-together. Spouses, kids and dogs are invited as well.

That’s not the only place employees can bring their dogs. FreshBooks’ office is “dog friendly, kid friendly and bike friendly.”

The company offers indoor bike parking as well as showers and a towel service, there’s also a gym on site. “You want your employees to feel good about themselves,” Mikita says.

But it’s not just fun and games. “People come in and they work hard,” Mikita says.

Whenever a new employee joins FreshBooks, no matter what their job is, they spend their first month work in customer support.

“Customer experience,” Mikita says “is the cornerstone of the organization.”

Working in customer support, “really gives you a good sense of what the challenges are that the customers are facing,” Mikita says. It also gives some employees a sense of “things that they might want to work on.”

But creating a great place to work isn’t just programs and policies. “What really make us stand out,” Mikita says, “number one would be the people here at FreshBooks, the people here really are a cut above.”

Getting a job at FreshBooks isn’t easy, though, Mikita says the company sets a high bar.

“We spend a lot of time in the interview process,” she says. “Everyone gets to meet and interview with the two founders.”

While there might be pressure to loosen standards as the company grows, “we do not waver when it comes to hiring the right people,” Mikita says.

“It’s about having a real focus on the customer,” Mikita says, “and it’s about fun and friendship.”