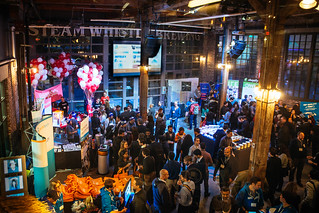 I can’t say I’ve ever been that person who knew exactly what she wanted to be when she grew up. I went through phases were I flirted with the idea of pursuing a number of different careers. Anytime someone asked what I saw myself doing in five years, I would break out into a sweat – I dreaded the question.

In the meantime, I worked at building my arsenal of skills. To myself, I would think that perhaps what I’m meant to do just simply doesn’t exist yet. And in a world of ever-changing and newly emerging technology, this idea isn’t far-fetched.

The tech sector has always been so elusive to me. It almost seemed like a world with a new language and a completely new set of rules – a dark hallway I was too timid to walk down. Who were these people who created these apps that fit so seamlessly into my life? So, this year, I decided to turn on the light. I resolved to become a part of this change, to conquer my fears, to break into technology.

But where do I start? After asking around my group of friends, I decided to start with a course. I got the impression that BrainStation was a great option for professional development. They had plenty to offer that aligned with my schedule and interests. It works that I’m able to take on a new endeavor without interfering with my current job. Most importantly, it gives me the opportunity to learn in a safe space and build a new community of peers. Three weeks into the User Experience Design course and I’ve gained new confidence while learning a great deal. Through the network of educators and students, I’m kept up-to-date with exciting tech-related events and Meetups around Toronto. Thursday night was my first!

Steam Whistle Brewing was abuzz with over 800 of the city’s brightest for Techvibes’ TechFest Toronto. The crowd ranged from determined job seekers to tech voyeurs alike all interested in hearing what some of the country’s top tech startups like EventMobi, Wattpad and Top Hat had to say. Perhaps the most interesting part of the night was when representatives from each of the 15 companies took the stage and made a three-minute ‘lightning pitch’.

In less than an hour, the crowd got a flavour for how each company started, what they do and why we should work for them. Following the pitches, attendees had the opportunity to network with company reps and snag some of the goodies they offered at their booths. I had the chance to rub shoulders with the folks at VarageSale, this year’s Startup of the Year, and Shopify, this year’s Employer of the Year. I even saw my friends from BrainStation and took a photo at their booth. The event was an incredible opportunity for those looking to enter the space. Apparently, there were over 250 jobs up for grabs in that room alone.

Now that I have one event under my belt, I’m looking to experience more. The city is brimming with interesting groups and Meetups perfect for curious individuals like me. I suppose with a little light, the space isn’t so daunting after all.