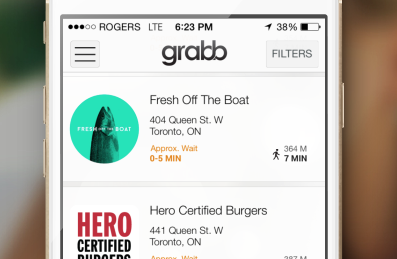 Like many university students, Kabir Daswani had a night class while finishing up his bachelor of commerce degree at Queen’s University.

During the break in the middle of class, tons of students would rush to the single café that was open at night, and it would take at least 10 minutes just to grab a coffee.

“I’m a big believer in technology and how it can make our lives easier, and I’ve always been fascinated by the convenience of mobile,” Daswani says. “I thought, we all have these devices in our pockets, and this was around the time the iPhone 5 came out, so I thought, ‘What can we do about these long lineups?’”

Two years later, Daswani is now the founder of Grabb, a mobile app company that is the latest addition to the Toronto food app scene. Users can pre-order and pre-pay for a meal using the app so they can avoid lineups, and receive a notification once the food is ready so all they have to do is pick it up. The app also allows you to see your approximate waiting time and view your place in the “virtual queue” in real time, so you can see how many other people using the app are ahead of you.

In the beginning, Daswani and a friend he developed the app and went from restaurant to restaurant asking owners if they would be interested in getting on their app, and currently, they boast partnerships with about 30 Toronto restaurants, including larger establishments like Hero Burger and Aroma espresso bar, and local offerings like Fresh Off The Boat and Buna’s Kitchen.

Daswani’s experience with securing clients is indicative of a trend in the food industry; many restaurant owners have a great openness towards technology as people become more demanding about what services they can access using their smartphones. “You’ll see all the up-and-coming restaurant names don’t just focus on the quality of food, they’re also focused on having really cool branding that can really sync with millennials,” Daswani says. “A lot of young restaurant owners are willing to try new things.”

Though they only launched their beta in September 2014, they’ve already heard interest from companies as far as Vancouver and Prince Edward Island. For now, though, they’re focusing on their home market in Toronto to ensure that they can perfect their service here first – though they’re definitely interested in pursuing opportunities in Montreal and Vancouver in the coming months.

“I think Toronto was an incredible market to launch in,” Daswani says. “The food and beverage industry is very competitive, and owners in Toronto are very in tune with tech and convenience trends.”