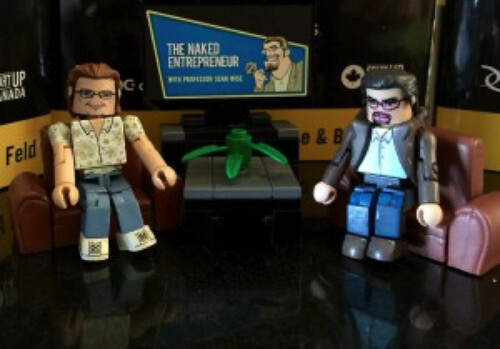 The Great Western Narrative has always been that you lived and died with a company. Golden watches became the status symbol as men and women struggled their entire lifetimes to build something for others.

A generational shift is happening to change that story. Real wages are stagnant, the economy seems uncertain and the entrepreneurs building billion-dollar empires have never shone brighter. It has never been more tempting to quit your day job and dive into a startup idea.

A community has grown around helping those who are taking their first steps into entrepreneurship — and nobody can talk about startup communities without mentioning Brad Feld. The Boulder-based venture capitalist cofounded Techstars, and he has played a role in the success of giants such as SendGrid, Makerbot, and Mattermark.

He’s coauthored a book, Startup Opportunities: Know When to Quit Your Day Job, with Dr. Sean Wise, a Canadian venture capitalist who manages one of Canada’s top university accelerators.

The book empowers readers with good startup theory and a glossary of terms you’ll need to survive your first few startup events. Case studies from different portfolio companies show the value of following that theory.

They practice what they preach when they advise their portfolio companies. In this case, they’re preaching about the good ideas you want to leave your job for.

What makes for such an idea?

You have to be obsessed about it. Wise isn’t often impressed on “first dates” — he believes “in building lines not dots when it comes to relationships,” a process that can take “many months.”

A good startup idea often takes five to ten years to execute well. Twitter took 6.4 years to go from its first funding round to its IPO and co-founder Biz Stone noted ironically that only “timing, perseverance, and ten years of trying will eventually make you look like an overnight success.”

That’s a lot of time to be working on something you don’t care about. A startup is often a slew of sleepless nights: make sure you’re working at something that will carry you even the worst of times.

You have to be sure there is an unmet need for your idea. Are people willing to pay enough for your solution to make it worth your while?

If your solution is a nice-to-have vitamin rather than an aspirin that solves a burning pain, it’s likely that the answer will be no.

Feld brings up an easy test for this: “Issac [the CEO of SendGrid] came up with the idea because it solved a problem he had.” Some of the best startup ideas have come from solving the unmet needs of the founder themselves.

Be sure that the need for your idea comes from a growing, profitable market. A great idea in a space with no room to grow is already constraining itself.

Feld says “you shouldn’t be a blacksmith just because you are obsessed with horses and good at metal shop. Even the world’s greatest blacksmith has to deal with the shrinking market for blacksmiths.”

Feld highlights Bre Pettis of Makerbot who “was obsessed with 3D printing, had deep domain expertise, and was relentless about pursing his vision.” Makerbot changed what was possible with consumer 3D printing by offering something that was so good, it shocked people to change their deeply ingrained habits.

Great startup ideas are not worth anything if you don’t execute on them. Feld emphasizes that “much of entrepreneurship is tacit knowledge, like playing guitar or riding a bike.”

So how do you learn?

“You learn by doing,” he concludes.

There’s no better time for that than the present, but you have to start somewhere. Even the best ideas will fall flat if they’re executed poorly. If you want to avoid your own golden watch, you’ll have to follow these guidelines to ensure your startup idea is one worth quitting your day job.