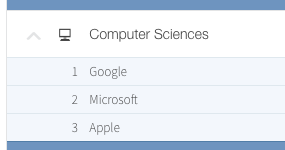 So, who does everyone want to work for?

The same companies as always, basically.

According to the most recent survey from talent strategy firm Universum Global, computer science majors across North America are pretty predictable when it comes to their career desires.

The top five companies they want to work for: Google, Microsoft, Apple, Amazon, and Facebook. Google has topped Universum’s annual list since it started in 2008.

Among engineers, graduates want to work for NASA, Google, and Boeing. Among business majors, it’s Google, Walt Disney, and Apple. Even among liberal arts grads, Google cracks the top three.

Is this a bad thing? Not necessarily. Just a little dull, is all. Perhaps next year we’ll see the likes of Airbnb, Pinterest, and Uber, at the very least—or maybe not. After all, if it ain’t broke, why fix it? Evil or not, Google remains a great place to work.