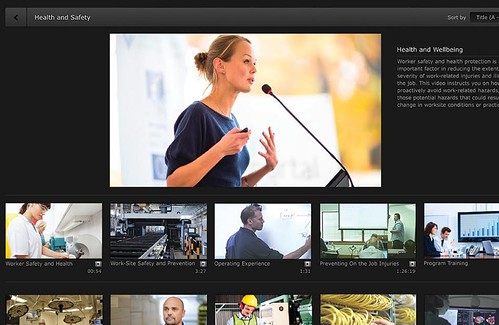 Large organizations are increasingly using video to communicate with their employees but getting that content to the right people can be a challenge.

“Video is emerging as the most compelling way to get your message across, whatever your message may be,” says Peter Maag, the chief marketing officer at Haivision, a Montreal-based video-technology company.

“In the enterprise, video is equally important,” he says. “The CEOs of Fortune 1000 companies want to have their all-hands meetings shown throughout the enterprise in real-time.”

It’s a new market for the 11-year-old company that has focused on developing back-end systems to encode and transmit video.

“We help surgeons cut, we deliver their endoscopic video to the desktop,” Maag says. It also helps transmit video from the nosecones of military drones. “Any time the U.S. military is watching video, it’s hitting our technology.”

The new platform will make Haivision and its technology more visible to end users.

“Calypso is taking the company into a much broader audience scope within the enterprise,” Maag says.

“We started with high performance encoding,” Maag says, but he says the company has always wanted to go beyond that. “It’s been our vision since we founded the company that the asset is the most important thing.”

He says the new platform “empowers that media asset,” the video itself, for enterprise users.

The platform uses a hybrid approach, combing both cloud-based and on-premise software. The platform has a web-based user interface for administrators but can rely on on-premise networks to distribute video, something that Maag says is necessary to avoid overwhelming networks when everyone at an organization is accessing the same video at the same time.

The platform allows users to set who can see a video, find out who has seen it, curate video assets and ensure that searches are leading to the right things.

“When you do a search on Netflix, you’re not looking for that exact Clint Eastwood scene when he says ‘do you feel lucky,’” Maag says. “When you’re doing a search in the enterprise, that’s exactly what you want to find, that very specific moment, that particular moment where a product is referenced, where a surgical technique is referenced.”

There’s a similar parallel when it comes to viewership data. Commercial videos want to know how many viewers they have and when viewership starts dropping off, because they’re monetizing it, enterprise users can use the same sort of data to ensure people are watching mandatory training videos.

“With a document, you can tell if someone’s downloaded the document” Maag says. “But with video you can actually tell how long they’ve played if for, on a person-by-person basis, so you can actually drive compliance through the use of video.”