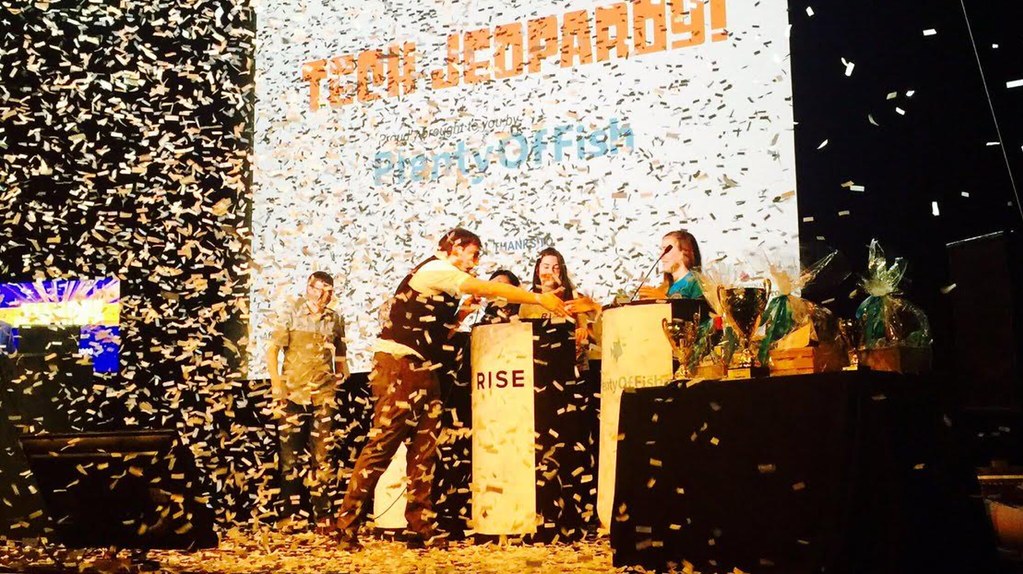 As the Vancouver Tech Sector continues to grow and companies contend for top tier talent, what are the industry’s major players doing to unite hopeful employees with employers?

Strong company cultures have become a standard in Vancouver’s tech sector. Many companies have adopted the Friday afternoon tradition of “happy hour,” when staff may end the workweek with a beer in hand, encouraged to socialize before heading out for the weekend. Now, more and more of these same companies are embracing this concept on a larger, more engaging stage, transforming conventional happy hours into collaborative networking events. For an industry previously reliant on career fairs and meetup style networking to connect like-minded professionals, this shift is a welcome change.

In the last year, PlentyOfFish has focused its community efforts on producing multiple local tech events to support this growing tech ecosystem through a combination of thought leadership, and fun.

In June 2015, nineteen of the largest Vancouver tech companies took the stage at Tech’s Got Talent to participate in an epic lip sync battle, while raising funds for local charities who support the development of youth in the Vancouver community. PlentyOfFish partnered with purpose-driven charitable platform and creators of Tech Pong, Chimp, to execute this evening of hilarity and networking, which successfully resulted in raising over $50,000 for children’s charities, and four hours of worthwhile networking and interaction for hundreds of attendees.

Quickly following Tech’s Got Talent came Level Up, an exclusive event presented by PlentyOfFish and RBC that set to explore Vancouver’s emergence as a world class tech hub. Bruce Croxon, successful entrepreneur and digital investor, made an appearance as keynote speaker.

“Level Up was one of the strongest networking events I’ve attended this year. Not only was the room full of talented professionals from Vancouver’s top tech companies, the panel of experts gave first hand accounts of what it takes for aspiring entrepreneurs to maneuver through the startup landscape. This event validated the strength of Vancouver’s tech community,” said attendee Keegan Morrison, Paid Acquisition Manager at Bench.

Succeeding Level Up, the tech industry geared down for the holidays. To push people out of hibernation, and kick start Spring, on February 25 2016, PlentyOfFish was at it again, and single-handedly hosted Tech Jeopardy.

Nine Vancouver tech companies went head to head in three rounds of skill testing questions, battling it out to win the ultimate prize of bragging rights as the most knowledgeable tech company in Vancouver. The evening was buzzing from start to finish as companies supported their participating representatives through creative signs, branded t-shirts, and team chants.

The evening ended with a bang from a confetti cannon as satellite communications corporation, MDA, were awarded the esteemed Tech Jeopardy Champion Gold Cup.

Techs Got Talent, Level Up, Tech Jeopardy and Tech Pong, are proof that the tech sector is successfully evolving in efforts to unite the community. With such a concentrated pool of talent in the Vancouver tech scene, (a great deal of which can be found periodically hopping between a handful of companies), these events are making it possible for companies looking to showcase their shared values and work ethic with potential hires. Not only do they highlight the company’s culture on the main stage, they create a platform for both employer and employee to stand out and engage with one another in the most unconventional way.