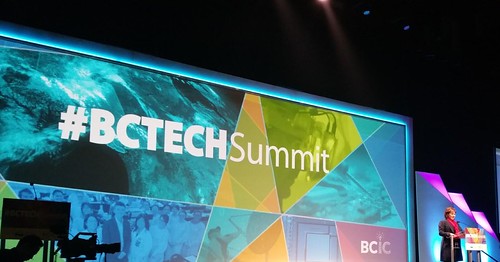 The #BCTECHSummit is well underway with an anticipated 2,800 people in attendance over the next two days.

In it’s inaugural year, the BC government, in partnership with the BC Innovation Council has brought together cutting edge entrepreneurs, venture capitalists, Vancouver’s business community and world renowned thought leaders to connect, collaborate and celebrate BC’s thriving tech sector.

In the Opening Keynote this morning delivered by the Honorable Christy Clark, Premier of British Columbia, a three-pronged approach was announced to support and encourage tech innovation and entrepreneurship in the province.

The first step being access to venture capital with a $100 million fund to support emerging companies along with renewed commitment to keep corporate taxes low. As well, continuing to offer tax credits to investors and digital media companies, in order to encourage investment and help “homegrown” companies stay firmly planted on BC soil.

Secondly, and perhaps the most exciting news of the day, is a new K-12 curriculum, which will be introduced beginning September 2016: Coding. That’s right, the basics of coding will be taught in schools across BC as means of investing into the future of both the province and our human capital.

The government will also be adding $450 million toward upgrading curriculums at the postsecondary level for in-demand jobs (read: the tech sector), which includes ensuring that existing university co-op programs are further enhanced or expanded. And finally, another $4.5 Million will be added to updating tech skills for BC’s existing work force. Improvements to the Provincial Nominee Program to help with the demand for talent in the tech sector, were also included in today’s announcement.

Finally, the Premier stated that the government’s commitment to supporting market access for commercializing tech innovations. This will range from creating a developer exchange to help emerging companies compete for government tendered contracts, to paying greater attention and investment for trade missions.

Christy Clark’s message was clear: the future of British Columbia is rooted in a diverse economy. One that focuses on the tech sector to build our intellectual capital, produce jobs, and lead in improving efficiencies through technology in other industry sectors, such as agriculture, health and cleantech.

With a packed agenda for the next couple of days, stay tuned for more coverage of the #BCTECH Summit.