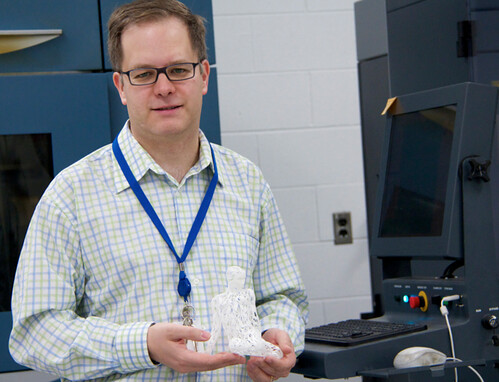 Stepping into the Christie Digital HIVE at the Communitech Hub is almost like entering a simpler version of the Star Trek Holodeck.

It’s hard not to get caught up in the hype, as more and more materials are added into the realm of 3D printing possibility, from metal to powder to plastic and even biological tissue.

“The most common misconception that I’ve heard is that if a part breaks, then you’re just going to reprint one,” says Mark Barfoot, Managing Director at Hyphen Services.

Since Kitchener-based Hyphen opened over a year and a half ago, much of the effort has been focused on education.

“In a lot of the media articles out there, it sounds like everyone is going to have [a personal 3D printer] next to their toaster and print parts at home,” Barfoot says.

But personal printers like MakerBots, household equivalents of the industrial fused deposition modelling (FDM) machines used at Hyphen, aren’t Star Trek replicators. “If the part broke in your washer, where do you get the CAD model for it?” Barfoot asks. Knowing what the part looks like and having the design are just the first steps to being able to print a new one, he adds.

Another limiting factor of the average consumer-level 3D printer is consistency.

“The lower-end machines are constantly breaking down, are constantly needing tweaking to get parts off of it,” he says, adding, “The quality of the parts that are coming off isn’t that great.”

Consumer issues aside, 3D printing is making its mark in manufacturing and rapid prototyping applications.

The medical industry is embracing 3D printing for everything from printing MRI devices to creating customized prosthetics. Aerospace is another industry embracing manufacturing applications of 3D printing. “There are a lot of regulatory issues to get through for that, but Boeing has over 100,000 3D-printed parts in the air,” Barfoot says.

3D printing is great for producing small numbers of items; when quick turnaround times are needed; or to just prove a concept for production.

These factors drove the team behind SmartBroom to turn to Hyphen in the initial design stages of its PT-2, a training aide for elite-level curling teams looking to improve their performance. SmartBroom gathers data from a curler’s sweeping movements so that they can be reviewed later by coaches.

3D printing services at Hyphen Services fit well with the needs of smaller, highly specialized companies like SmartBroom. “The intent was always to 3D-print the cases [that hold SmartBroom’s components], because we have such low volumes,” says Geoff Fowler, co-founder of SmartBroom, which is a side project from his day job at COM DEV, the Cambridge-based satellite technology company.

For such a specialized item, traditional production options would have been unfeasible. Prototyping through traditional injection molding would have been prohibitively expensive, Fowler says, adding, “We would have to do runs in the hundreds of parts and we simply don’t have the market for that.”

Hyphen’s 3D printers make it possible to tweak prototypes “almost on the fly,” Fowler says. “Between two different brooms, we can tweak little things here and there to optimize the design as we go.”

Even simple applications like printing jigs and fixtures for manufacturing other parts can make an impact, when production time is everything. “If you can print it in two days instead of two weeks, then in reality, if it broke in two years, it’s still cheaper for you to remake it than to have wasted the time to make it more durable,” Barfoot says.

He uses the concept of the hype cycle to explain misconceptions around what 3D printing can and cannot do.

When new technology is introduced and it gets a lot of media attention and public buy-in, it hits a peak. As Barfoot further explains, “Then all of a sudden [people feel] ‘this isn’t as good as we thought,’ and then [interest] drops – but when it drops is when the real innovation happens.”

Hype over new processes like 3D printing typically leads to unrealistic consumer expectations early on, followed by a period in which real innovation around the process takes hold. Prototyping with 3D printing already went through this hype cycle 20 years ago, followed shortly by manufacturing using 3D printing, which is starting to see a real increase.

“Right now we are getting to the top of the hype of the consumer market, because there is a lot of media attention out there saying, ‘Everybody is going to 3D print’,” he says.

The notion that you’ll be printing your own parts, as an average consumer, seems to be a stretch for the time being. But as the hype around consumer 3D printing declines, new uses and possibilities are sure to emerge.

Barfoot sees potential for facilities like Hyphen, or a “Kinko’s kind of market” for 3D printing, “where people would kind of go to a place and have a part printed for them, and I see that as more beneficial than people actually having one in their houses.”

This article originally appeared on Communitech.