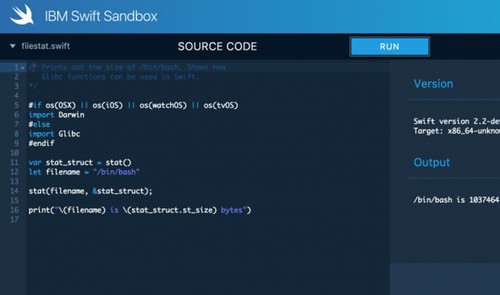 At InterConnect 2016, IBM announced the furthering of partnerships with two major companies: Apple and VMware.

With Apple, IBM announced the next phase of its roadmap to bring Swift to the Cloud with a preview of a Swift runtime and a Swift Package Catalog to help enable developers to create apps for the enterprise. This means that IBM is the first cloud provider to enable the development of applications in native Swift, Apple’s programming language introduced in 2014.

“Modern digital apps require a modern programming language. Swift is easy-to-learn, reliable, fast and interactive, the key traits that CIOs look for when building the next generation of enterprise mobile apps,” said Michael Gilfix, Vice President, IBM MobileFirst Offering Management. “Swift on the Cloud is an opportunity for enterprises to radically simplify the development of end-to-end applications and therefore reach new levels of productivity.”

With VMware, IBM will help preserve and extend customer investments across thousands of data centers by enabling customers to leverage VMware’s technologies with IBM’s footprint of 45 cloud data centres worldwide. In addition, VMware says that it has extended vRealize Automation and vCenter management tools to deploy and manage environments on the IBM Cloud, as if they are part of a customer’s local data centre.

“This partnership, an extension of our 14-year plus relationship with IBM, demonstrates a shared vision that will help enterprise customers more quickly and easily embrace the hybrid cloud,” said Pat Gelsinger, chief executive officer, VMware.

“We are reaching a tipping point for cloud as the platform on which the vast majority of business will happen,” said Robert LeBlanc, senior vice president, IBM Cloud. “The strategic partnership between IBM and VMware will enable clients to easily embrace the cloud while preserving their existing investments and creating new business opportunities.”

The announcements were made at the MGM Grand Garden Arena in Las Vegas.