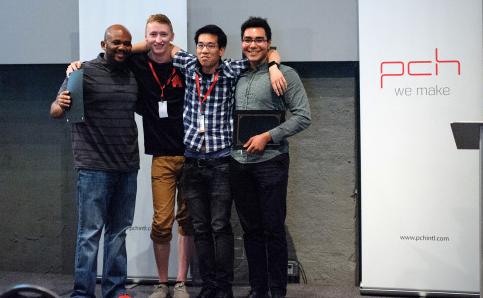 ICEBox Data Mesh, which developed and prototyped a wireless mesh network and content delivery system, has won the PCH Hardware Hackathon in Kitchener-Waterloo.

The product, which provides a wireless ad hoc network, delivering offline access to the Internet was designed and created in 54 hours.

Over the course of the weekend, over 120 participants collaborated to hack new hardware devices from concept, to working prototype, to final product.

The ICEBox Data Mesh team was awarded a $3,000 cash prize as well as free company incorporation with LaBarge Weinstein and $10,000 in Celery credits. In addition, the winning team won an all access pass to Solid conference and $800 in travel costs.

Second prize was awarded to Bricks & Bytes, which created a product that helps educate children with tactile modules that connect to an application.

Third prize was awarded to DAWN, which developed a device that automatically adjusts your blinds according to the climate, helping consumers reduce energy costs and optimize their environment. The team received $3,000 in Celery credits.

Among the other prototypes devised and created at the PCH Hardware Hackathon were Artifact, which developed a healthcare device that allows patients to provide real-time feedback while in the waiting room and DryPhone, which uses RFID technology in washing machines to detect when a device is accidentally put in the machine and provides a verbal warning to the user.

“Hackathons accelerate innovation – helping entrepreneurs meet each other, create working prototypes, develop marketing pitches and test product appeal,” Liam Casey, Founder and CEO of PCH, said. “The pace of development, the scale of ambition and the significant levels of creativity that we witness over just two days, is always outstanding.”